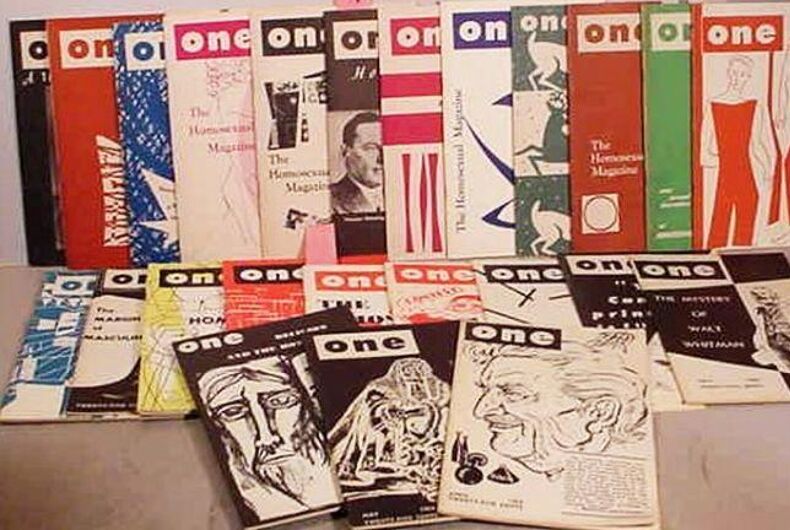 This month marks the 61st anniversary of the landmark U.S. Supreme Court decision regarding one of the earliest gay publications in America, ONE: The Homosexual Magazine.

The U.S. postal service had attempted to ban the magazine as “obscene,” and the one-sentence 1958 Supreme Court ruling in the magazine’s favor marked the first time gay rights ever won in the highest U.S. court.

It all started back in January 1953 when ONE — a magazine published by an offshoot of the early gay men’s organization, The Mattachine Society — published its first issue. It sold for 25 cents in gay bars (about the price of a beer) and had articles like “Homosexual Rights,” “Are Homosexuals Neurotic?,” and “A Tribute to Dr. Kinsey,” according to gay historian Matt Baume.

The 1950s and ’60s were a time when being openly gay could get you arrested, beaten up by cops, thrown in jail, criminally charged as a sexual offender, fired from your job and publicly disgraced with your name published in the paper just for being in a gay bar or consorting with “known homosexuals.”

So any magazine about gay men was, in essence, encouraging criminal activity.

Related: 5 things you may not know about the Stonewall rebellion

ONE magazine did its best not to publish anything that could even remotely be considered scandalous. Baume explains what they forbade (and how they got into trouble nonetheless):

No matchmaking ads; no racy photos; no descriptions of physical intimacy—even cuddling. But the following year, an issue contained ads for sheer pajamas and a short story that involved some touching, which led the Post Office to seize the issue.

Julber believed Olesen’s refusal to mail ONE violated U.S. constitutional guarantees to free speech and equal protection under the law. The case was so contentious that not even the Los Angeles ACLU wanted to touch it.

As evidence of obscenity, he cited one piece of fiction in which a woman recalls an affair with her college roommate and decides to live with the woman rather than marry a high school boyfriend.

This was “obviously calculated to stimulate the lust of the homosexual reader,” Clarke said. He also cited as “filthy” a bawdy poem called “Lord Samuel and Lord Montagu” and an ad for a Swiss magazine which could, he said, “lead to the obtaining of obscene matter.”

Julber also lost at the 9th Circuit Court of Appeals in February 1957. ONE magazine nearly went defunct since it was unable to reach its over 2,000 subscribers.

But Julber’s eventual 1958 victory at the U.S. Supreme Court was helped by the fact that several lower courts had allowed the publication of literature advocating nudism and polygamy. Seemingly, the courts were now discriminating against ONE just for writing about homosexuality.

The U.S. Supreme Court’s one-sentence ruling in ONE‘s favor stated, “The petition for writ of certiorari is granted and the judgment of the United States Court of Appeals for the Ninth Circuit is reversed.”

Because of its brief response, the court’s brevity did nothing to prevent similar “obscenity” lawsuits against other queer-created works of literature like Allen Ginsburg’s 1956 poem Howl and William S. Burroughs’ 1959 novel Naked Lunch.

Nonetheless, in the issue after its U.S. Supreme Court victory, ONE told its readers, “For the first time in American publishing history, a decision binding on every court now stands … affirming in effect that it is in no way proper to describe a love affair between two homosexuals as constitut(ing) obscenity.”

The ruling also paved the way for physique pictorial magazines that were among the earliest examples of mass produced gay photo erotica.