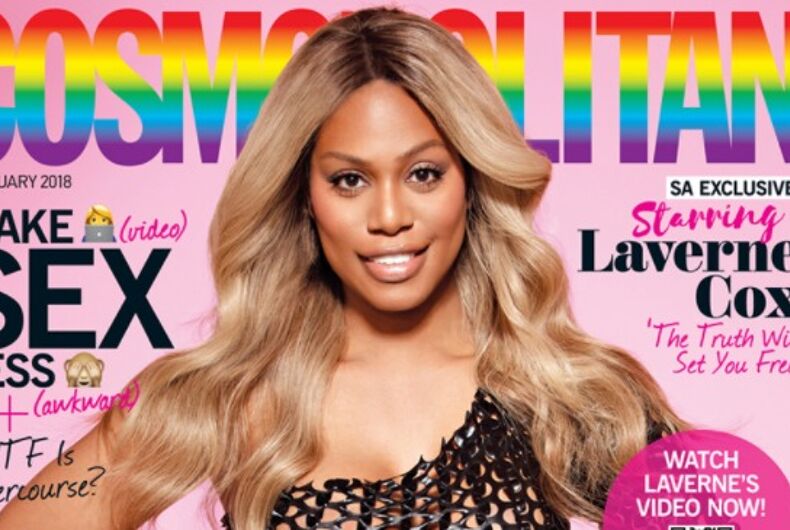 The trans actress and activist graces the cover of Cosmopolitan South Africa, which has been given an LGBTQ makeover for a special “Say Yes To Love” issue.

Inside the covers of the magazine, readers will find a handwritten note from Cox.

“Your voice matters, the truth of who you know yourselves to be matters. The truth will set you free!” it reads.

“Trans women deserve to be loved out in the open and in the light,” she adds.

“We wanted to disrupt hetero-normative ideas around February and Valentine’s Day and look at love in 2018 – including acceptance of self, others and non-binary relationships,” explained the publication’s editor, Holly Meadows.

“Our goal was to play a small part in providing visibility for the LGBTQI+ community, of which Laverne has become a revolutionary icon,” she added. “Cox is the world’s most vocal trans poster girl and an activist for the intersection of race, class and gender identities, challenging toxic masculinity, white supremacy and the misrepresentation of trans people.”

“For us at COSMO, love – at least for this issue – is celebrating Laverne as the fun, fearless female she is.”

Cox shares a personal story from her love life

Cox is featured in a behind-the-scenes video from the photo shoot, where she opens up and gets personal about just how empowering it can be to find love and respect.

“As a black transgender woman, I’ve often been kept a secret by the men I’ve dated,” she shares in the video. “So when my ex-boyfriend introduced me to his dad, and invited me to spend Hanukkah with him and his family, it was the most special thing ever.”

Cox also reveals who her celebrity crush is, and who she’d most want to be stuck in an elevator with (Hint: There are rumors she might run for president in 2020).

Finally, she offers an inspirational message to readers.