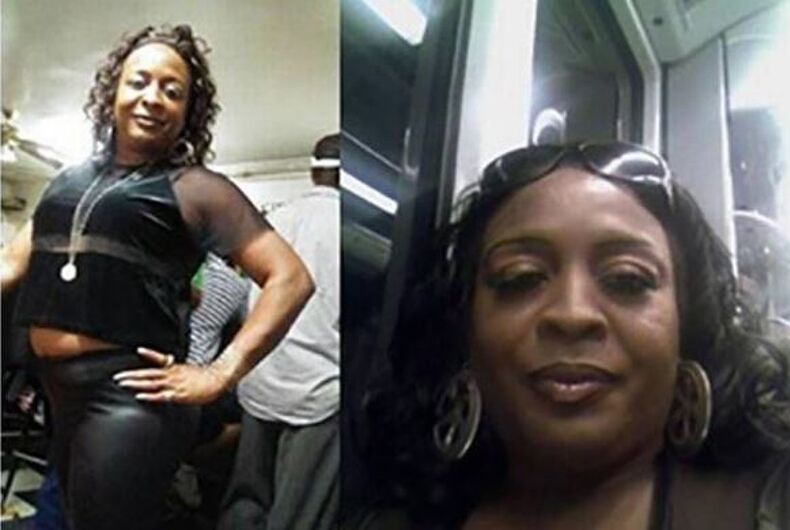 Transgender woman Sherrell Faulkner died on Tuesday of injuries sustained during a Nov. 30 assault in Charlotte, North Carolina. This death makes the 11th transgender person to die as a result of violence in the United States in 2017.

Faulkner, 46, was discovered beside a dumpster and in what is generally considered an LGBTQ-friendly part of the city. In fact, according to the census, it is the gayest area in all of both North and South Carolina.

This case is now being investigated as a homicide.

Detectives were notified of the death by the Mecklenburg County Medical Examiner on Wednesday, reports local NBC affiliate WCNC, which happens to have been the International Day Against Homophobia, Transphobia, and Biphobia.

“Our hearts are heavy with the news of the death of Sherrell Faulkner. North Carolina’s LGBTQ community and everyone at Equality NC’s thoughts are with the victim of this tragic violence,” Ames Simmons, director of transgender policy at Equality North Carolina, said in a statement. “We are facing a national epidemic of violence with eleven trans people, many of them transgender people of color, murdered in 2017. We are asking leaders and community members at every level to consider both the overt and underlying reasons for these killings. We must address the root causes of violence against our community, and we cannot rest until the violence stops.”

At the time of the attack, North Carolina’s anti-LGBTQ law House Bill 2 (HB2), requiring transgender people to use bathrooms matching the gender on their birth certificates and nullifying non-discrimination ordinances passed by cities in the state, was still on the books.

That law has since been replaced by House Bill 142 (HB142), which still prohibits LGBTQ people from achieving full equality.

Trans athlete shares journey with side by side prom pictures, goes viral