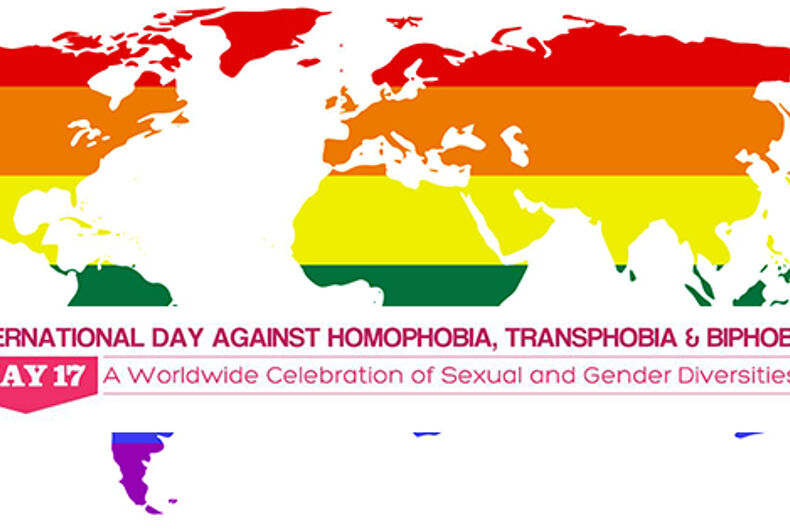 Today is the International Day Against Homophobia, Transphobia & Biphobia (IDAHOT), calling attention to the discrimination and violence faced by the LGBTQ community around the world, and the need for a continued fight for nationwide civil rights.

Communities across the globe are marking the day with marches, rallies, and with symbolic gestures, such as lighting buildings in rainbow colors, and flying pride flags.

The day, first observed in 2005, is celebrated in more than 120 countries. It is as important and needed now as it has ever been, with same-sex relationships still outlawed in dozens of countries, at least ten countries where it is still punishable by death.

Anti-LGBTQ sentiment has been on the rise over the past several years in places such as Russia and in many parts of Africa, while anti-LGBTQ legislation continues to rear its ugly head across America. The Human Rights Campaign is tracking 100 such bills introduced this year across 29 states.

The transgender community faces barriers to acceptance in regards to their gender identity, and heightened discrimination and violence even in comparison to other members of the LGB community.

This year in America alone at least ten transgender individuals have been murdered as a result of anti-trans bigotry. Last year was the highest reported year on record for the murder of trans people, which had also been true of the previous year.

The situation in Chechnya, where gay and bisexual men are reportedly being abducted, abused, interrogated, and in some cases murdered, has draw international headlines and condemnation from world leaders. Keeping awareness on these atrocities is at the center of this year’s mission.

“Many actions will focus on the horrible situation in Chechnya this year, where dozens of LGBT people have been rounded up, tortured and killed by government forces. Around the world, rallies and protests are being organised to denounce the situation and put pressure on leaders to bring it to an end,” organizers said in a statement.

In some areas, events had to be called off under threat of violence, underlying the continued struggle LGBTQ rights activists face.

“But while mobilization grows in some parts, IDAHOT events have had to be cancelled in several places due to pressure from opponents, as in Lebanon or Bosnia,” the statement continued. “In the Caucasus country of Georgia, activists have been driven off the streets by violent attacks for several years now, as opponents ‘claim’ May 17 as the ‘day of traditional families.'”

However, according to a post on the official IDAHOT Facebook page, activists went ahead with a demonstration in Georgia anyway, in spite of the anti-LGBTQ sentiments.

Organizations fighting for LGBTQ rights face a daunting task at times, but have made notable progress throughout the years, both in the United States and abroad. The International Day Against Homophobia, Transphobia and Biphobia not only helps raise awareness, it also works to raise needed funds for those groups to continue their advocacy work so that further progress can be made.

To learn more or to donate visit dayagainsthomophobia.org.