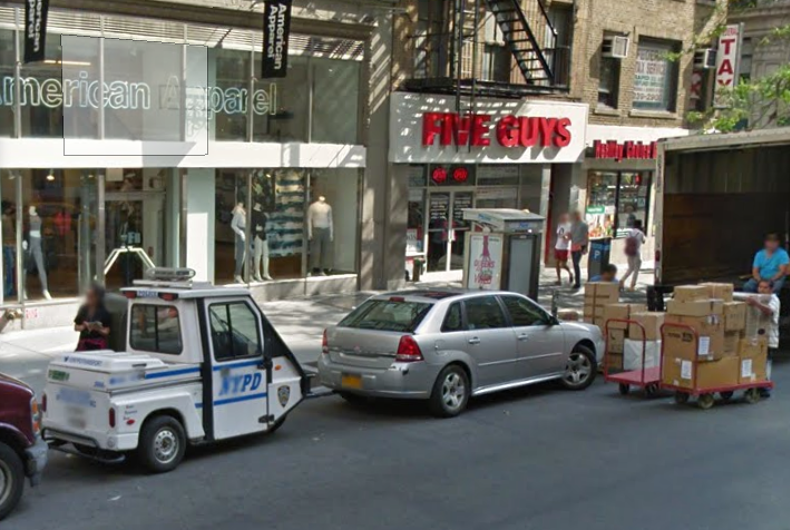 A transgender woman who was found unconscious outside of this Five Guys restaurant has died.Photo: Google Maps Street View

UPDATE: This story has been revised to reflect updated information about the victim’s name, gender, and race; the arrest of a suspect in his murder; and new details about the crime.

Police in New York City have arrested a man they describe as homeless for the murder of a transgender man of color found unconscious in Midtown Manhattan in April, who died last week after being beaten in the head with a pipe.

Kenneth Bostick, 59, is the 10th reported murder of a transgender person  this year. All of the victims, including Bostick, were people of color.

Bostick was found outside a Five Guys restaurant around 10:30 p.m. April 25, WNBC-TV reports. That location, according to the New York Daily News, was  just a few blocks from the W. 25th St. shelter where he had been staying since March, sources told the paper. Reports say he may have known his attacker, who had stayed at that same shelter when he was living there in 2015.

When Bostick first arrived at Bellevue Hospital Center with a head injury, medical workers did not suspect criminal activity. So police didn’t learn about the incident until the man died.

Detectives have obtained surveillance video from that Five Guys restaurant, which the paper reported shows a man standing over Bostick’s body.

Police say that man is Joseph Griffin, 26, and that he has a criminal record of 28 arrests but no convictions. He reportedly rushed into traffic just steps from the scene about one hour after Bostick was attacked, climbed atop a taxi cab and jumped onto the hood, smashing the windshield, police said.

Moments earlier he was seen by witnesses behaving erratically, running against oncoming cars and banging on the glass of a bodega, prosecutors said.

Cops arrested Griffin Friday, accusing him of bashing Bostick’s head with a pipe. New charges were pending according to the Daily News.

“He was arrested in the subway station only half a block from the location of the assault, informed the detectives who arrested him that location was his home,” said Assistant District Attorney Sarah Marquez. “Other circumstantial evidence ties the defendant to the assault, and the people expect the defendant to be charged with that crime as soon as an eyewitness to the crime returns from a trip out of the country.”

A Legal Aid lawyer representing the suspect, Nalia Siddiqui, claimed at the arraignment that he was hit by the cab and fell onto it. She didn’t address the attack on Bostick.

City Councilperson Corey Johnson told WPIX-TV he was “saddened and angered” by news of the man’s death.

“There must be zero tolerance for acts of violence, particularly against transgender individuals, who are disproportionately targeted by hate crimes and discrimination,” Johnson said.

“We know that transgender women are targeted all too often for severe and deadly violence,” said Beverly Tillery, Executive Director at the New York City Anti-Violence Project, in a statement before it was revealed that Bostick was a transgender man, not a transgender woman.  “We are facing a crisis of violence. Ten transgender woman have already been killed so far in 2017 and this must stop. As a society we can stop this epidemic by hiring trans women of color, making sure they have safe places to live and standing up when we see or hear them being demeaned and attacked and simply by valuing their lives. The moment to act is now.”

Will Allen West be Trump’s next Army Secretary nominee?