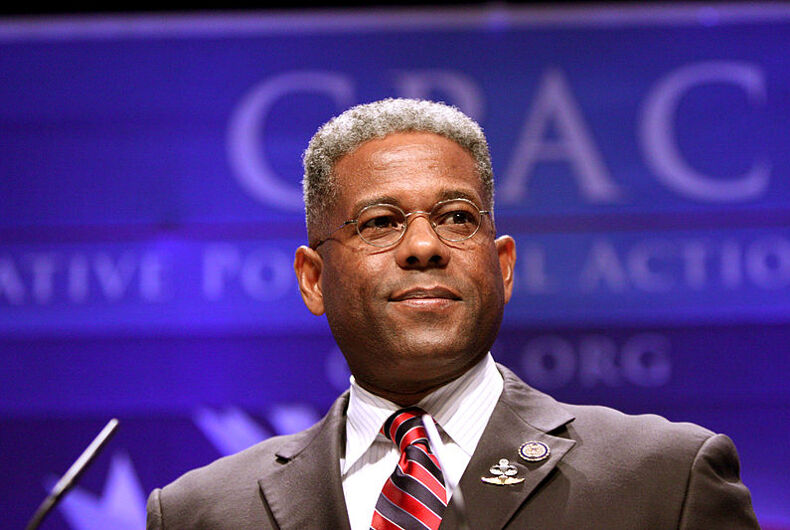 Mark Green, President Trump’s second choice for Army Secretary, withdrew amid pressure from progressives over his anti-LGBTQ record. Now Family Research Council President Tony Perkins is pitching Allen West to be Trump’s next pick, despite the fact that he too has an anti-LGBTQ record, suggesting it wouldn’t be an easy path for him either.

West, a retired U.S. Army Lieutenant Colonel and former member of the U.S. House of Representatives, spoke out against the repeal of Don’t Ask, Don’t Tell (DADT), saying it was unfortunate that gay people were serving in the military and suggesting that the best compromise was DADT.

West also criticized Barack Obama for supporting same-sex marriage, wrongly predicting that it would cost him the black vote.

His military career ended after he fired his pistol near the head of an Iraqi police officer in an attempt to gain information.

Perkins had the following to say, via email, about why West should be the third choice for Army Secretary:

What does evolution theory have to do with the Army? A lot, if you want to be the branch’s secretary. That’s just one of the fights the Left picked over Donald Trump’s choice to lead the Army. Dr. Mark Green’s beliefs on everything from creation to sexuality became the subject of a nasty campaign to discredit the respected flight surgeon — a campaign, unfortunately, that ended Friday when Green withdrew his name from consideration.

“Due to false and misleading attacks against me, this nomination has become a distraction,” Green said. “Tragically, my life of public service and my Christian beliefs have been mischaracterized and attacked by a few on the other side of the aisle for political gain.”

LGBT activists, in particular, were upset that Green supported privacy laws like North Carolina’s and the view of marriage that Bill Clinton, Hillary Clinton, and even Barack Obama held at one point. To them, that was an unacceptable change from former Army Secretary Eric Fanning — who not only identified as gay, but openly used his power to advance that agenda in the military. (How convenient that Fanning wasn’t put under the same scrutiny when he was nominated!) Green, on the other hand, was maligned, misquoted, and mistreated by liberals desperate to keep a pro-family, pro-gun, pro-freedom, pro-marriage leader from a position of military authority.

Let’s face it: eight years of social experimentation won’t self-correct. President Trump needs someone at the helm with the courage to undo the devastation of the Obama years. If not Mark Green, then someone like Lt. Colonel Allen West or former Congressman Randy Forbes, both respected conservatives who have proven they have the military’s best interest at heart. After two terms of political correctness, our soldiers deserve an Army Secretary who will do whatever it takes to boost morale, defend freedom, and restore readiness. Anything less not only puts the military at risk, but America too.

Four married lesbian couples are suing the state of Tennessee