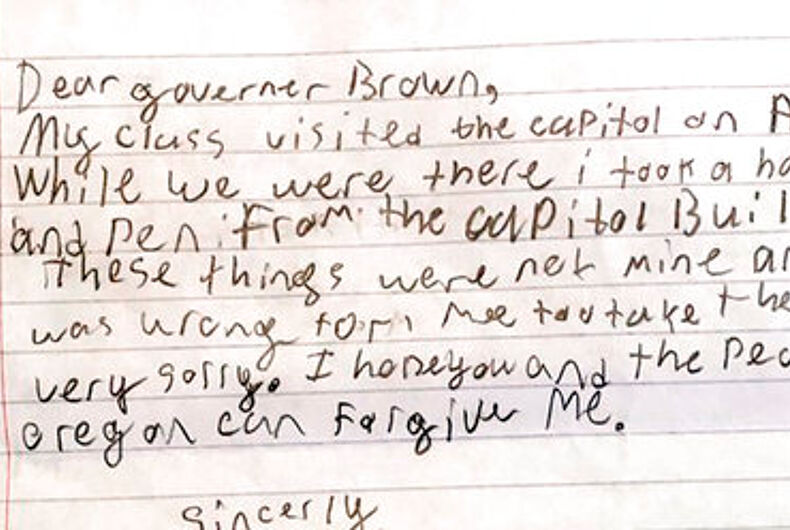 This photo provided by the Office of Oregon Gov. Kate Brown shows a portion of an apology letter from a fourth-grader to Gov. Brown, explaining that his class had toured the Capitol on a field trip in April 2017 and how he took a hazelnut and a pen from the Capitol Building. In a note replying to the letter, which included the pen in question and a $1 reimbursement for the hazelnut, Brown thanked the young man and wrote "I accept your apology and forgive you." (Saerom England/Office of Oregon Governor Kate Brown via AP)Photo: via AP

The governor of Oregon has pardoned a fourth-grade boy who swiped a hazelnut and a pen during a recent tour of the state Capitol.

Gov. Kate Brown on Thursday tweeted out a photo of the boy’s apology letter along with the hashtag #cutestmailever and the caption, ‘I think we can forgive Samuel, don’t you think, Oregonians?’ The tweet immediately got many likes and retweets.

In the pencil-written letter, Samuel explains that he visited the Capitol Building on a classroom tour on April 19 and took the items.

“These things were not mine and it was wrong for me to take them. I’m very sorry,” he wrote. “I hope you and the people of Oregon can forgive me.”

Included with the letter were the pen and $1 to cover the cost of the stolen hazelnut.

In a return letter, Brown said she accepted his apology and forgave him on behalf of all Oregonians.

“Oregon is a special place. I hope we can work together to keep it that way,” the governor wrote.

As a final gesture of goodwill, she enclosed a new pen for Samuel to “remember this event.”

© 2017, Associated Press, All Rights Reserved.
This material may not be published, broadcast, rewritten, or redistributed.
News
Kate Brown, Oregon