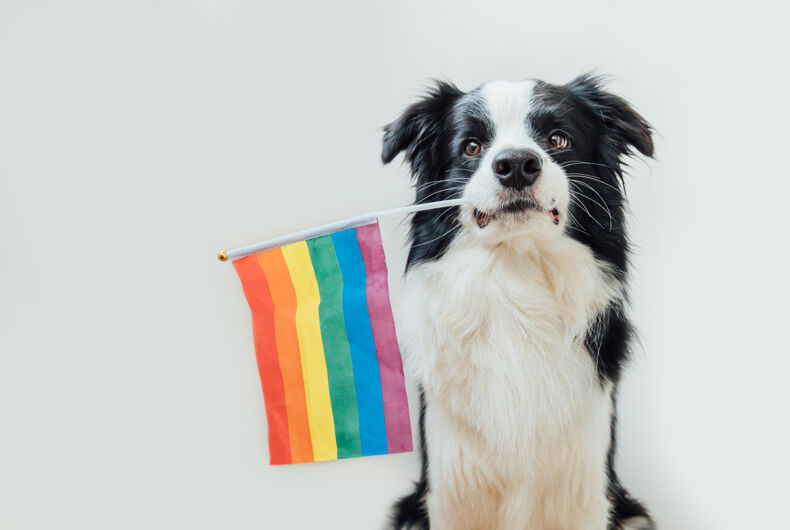 The nominees for Good News Hero brought us some much needed happiness, whether they were standing up for their children, showing off the trans flag on television, or sharing stories of overcoming adversity.

These five individuals made our days a little brighter.

You can vote now to tell us who who think should be LGBTQ Nation’s Good News Hero.

Without further ado, the LGBTQ Nation nominees for “Good News Heroes” are Chris Attig who was arrested while testifying against an anti-trans bill in Arkansas in honor of his transgender son; Weston Charles-Gallo, who testified before Congress about the importance of allowing LGBTQ parents to adopt; Jen Ellis, the lesbian mom who knit Bernie Sanders’ viral mittens; Kate Freeman, a jeopardy champion who also championed trans representation; and Trevor Wilkinson, who successfully fought his school’s sexist dress code.

Chris Attig is the father of a transgender teen who was arrested while testifying against an anti-trans bill in the Arkansas House. Attig’s arrest came because their speech went 30 seconds over their allotted time, even though far-right representatives of hate groups were allowed to talk for nearly an hour over their allotted times.

Video was shared online of Attig being dragged out of the legislature by officers while defending the rights of transgender minors who, like their 22-year-old son did, need access to gender-affirming medical care.

The Arkansas House was holding a hearing on H.B. 1570 on March 9, which banned doctors and other health care professionals from providing gender-affirming health care for transgender minors.

While their son is an adult and wouldn’t be denied health care, Attig knew that the issue is about other trans kids in the state having access to life-saving medication… as well as the message a law like this sends and the ostracism it can cause.

“Whether or not these laws are targeted at somebody above or below the age of 18, the singular message that they send is it is OK to bully and persecute people who are trans,” Attig said. “It says, ‘The legislature is doing it, why can’t I?’”

They spoke directly to trans youth: “No matter what happens here today, you are loved. You are loved.”

In May, Weston Charles-Gallo a gay man who was kicked out of his home at age 14 and adopted by two dads, testified in Congress about how important it is to stop religious foster and adoption agencies from banning same-sex couples who want to be parents.

Speaking in favor of the Every Child Deserves a Family Act (ECDFA), Charles-Gallo brought another perspective to the debate. He told the committee about how, after he left his biological family’s home, he was told he might not get placed with a foster family because of rampant homophobia.

“When I entered foster care, I was open about my sexuality; that later became a concern in finding a placement,” he said. A social worker told him that several potential families didn’t want him placed with them because they thought he would “turn the other children gay or be a predator.”

Charles-Gallo said that he felt worthless and started having suicidal thoughts as he stayed in an emergency shelter and no one wanted to adopt him.

Now he’s an adult and trying to help LGBTQ youth and stand up for great parents like his two dads.

At President Biden’s inauguration, a shot of the 79-year-old senator — sitting legs-crossed, socially distanced from others, with a disposable mask and very large and distinct mittens on — went viral immediately.

The Internet was flooded with memes of the mitten-clad Sanders, with Ellis’ work prominently displayed.

Bernie pivots conversation away from the memes and talks about the teacher who made the mittens.

Ellis made the “swittens” in 2016 as a gift for several people who worked at her daughter’s preschool. One of those people was the preschool’s owner Liza Driscoll, who is Sanders’ daughter-in-law. Ellis made an extra pair for Driscoll to give to Sanders, and the rest is online history.

Sanders’ family, then, turned the meme into an even more heartwarming story, making sweaters and shirts featuring the viral picture and donating the proceeds to charity.

“I’ve tried not to let all of the mitten business overshadow the gloriousness of sitting with my five-year-old daughter and my partner and watching the first woman be sworn in as vice president,” Ellis told Jewish Insider at the time. “That’s amazing.”

Bernie’s mittens are made by Jen Ellis, a teacher from Essex Junction, Vt. She gave them to him 2+ years ago and was surprised when he began wearing them on the campaign trail. They are made from repurposed wool sweaters and lined with fleece made from recycled plastic bottles. pic.twitter.com/ErLr29lY2t

Kate Freeman, a transgender woman from Lake Orion, Michigan, became a Jeopardy! champion in December while wearing a trans flag pin to quietly represent the trans community on the show. A financial analyst, Freeman took home $5,559 in cash winnings.

“I spent a lot of time learning about and reflecting on my gender identity in grad school, coming out as transgender and lesbian a few months before graduating,” Freeman said. “I’m proud to be out and I know representation is important.”

Freeman tried again and again to get on the show, taking the qualifying test every year with her mother. When she finally made it, she said that she had always wanted to meet Alex Trebek.

“It really lived up to my childhood dreams of being on the show,” she said. “I was honored to be able to meet Alex before his passing.”

Trevor Wilkinson was a senior at Clyde High School in Texas when he got suspended for wearing nail polish to school. The school allowed girls to wear make-up and nail polish, but since he was a boy he was told to go home and stay home until he looked more traditionally masculine.

He spoke at a local school board meeting about how being denied an education due to the discriminatory dress code policy that prohibited boys from wearing nail polish.

“Having a double standard like this only shows that Clyde doesn’t accept kids for who they are and they shouldn’t be themselves because the very people that are supposed to create a safe environment can’t accept them,” he said in an impassioned speech.

Wilkinson’s story went viral after he started a Change.org petition to change the school policy.

At first, the school board wouldn’t budge, but ultimately Wilkinson’s efforts paid off.

“MY HIGH SCHOOLS DRESS CODE IS GENDER NEUTRAL FOREVER OH MY GOODNESS,” he tweeted after the school board decided to make their dress code gender-neutral.

He showed us that sometimes all it takes to create change is for one colorful teenager to speak out.

There is no doubt that all the nominees helped us think more positively this year. Vote now and tell us who your Good News Hero is.