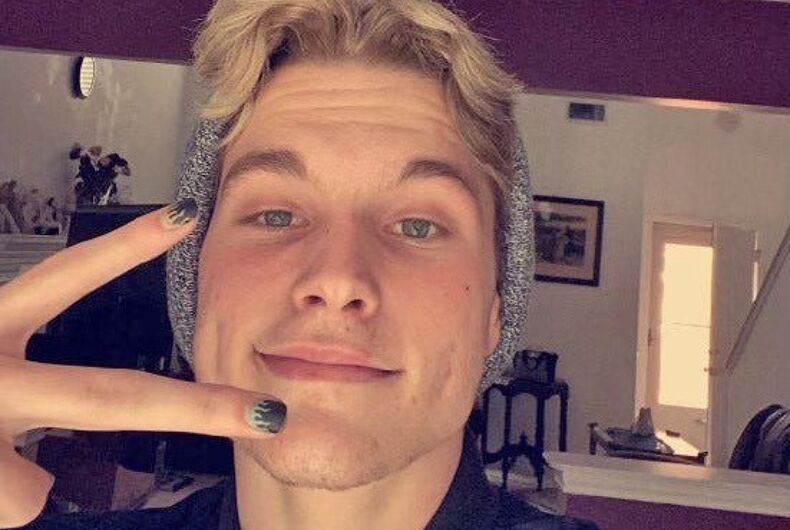 Trevor Wilkinson, the gay teen who got suspended for wearing nail polish to his Texas high school because of its sexist dress code, has reason to celebrate now.

“MY HIGH SCHOOLS DRESS CODE IS GENDER NEUTRAL FOREVER OH MY GOODNESS,” he tweeted yesterday, after the district school board decided to change the dress code to no longer differentiate the policy by gender.

“It is with great honor that I am pleased to announce that Clyde High School’s dress code is officially gender neutral forever,” Wilkinson told local ABC affiliate KTXS.

A school board committee created to review the policy unanimously voted to do away with the old policy. The new policy removes policy differences and references to “boys” and “girls” with “students” and does not prevent students of any gender from wearing makeup, nail polish, jewelry, or piercings.

“I’m at a loss of words for the joy I am feeling on this special day. I am so blessed by the support, love, and help I have received through this experience.”

Wilkinson went to school in late November with nail polish on, and he was given an in-school suspension (ISS). He got in trouble because the student handbook at the school specifically says that male students are not allowed to wear nail polish or makeup.

Because he violated the dress code, he was told he would stay in ISS until he removed the nail polish, but he didn’t give up without a fight. “Repeated offenses may result in more serious disciplinary action in accordance with the Student Code of Conduct,” the handbook said at the time.

Wilkinson’s story went viral after he started a Change.org petition to change the school policy. It has amassed more than 400,000 signatures since November.

imagine your school not allowing boys to paint their nails and giving boys iss for it. and the whole administration being okay with it, homophobic and sexist? welcome to west texas🤠

https://t.co/DA9ZvSBDc9 YALL GO SIGN MY PETITION!! homophobia and sexism are NOT okay and should not be tolerated!! Every signature counts!!

The Clyde Independent School District (CISD) school board, though, wasn’t budging. Superintendent Kenny Berry said in a statement that “the District expects students to abide by established rules of conduct” and that the dress code would not change before the district’s “annual review of the Student Handbook.”

Wilkinson said that before he even got his ISS, the ACLU had already sent a letter to the school district that their dress code might violate civil rights laws.

He then spoke at the school board’s next meeting about how he is being denied an education.

“I got my education taken away from me for something as minor as painting my nails because it’s against the dress code,” he told the Clyde CISD school board, wearing nail polish.

“This isn’t about me anymore,” he said. “It’s about a discriminatory, sexist policy that needs to be changed.”

He then explained why the policy is so harmful to LGBTQ students.

“Having a double standard like this only shows that Clyde doesn’t accept kids for who they are and they shouldn’t be themselves because the very people that are supposed to create a safe environment can’t accept them,” he said.