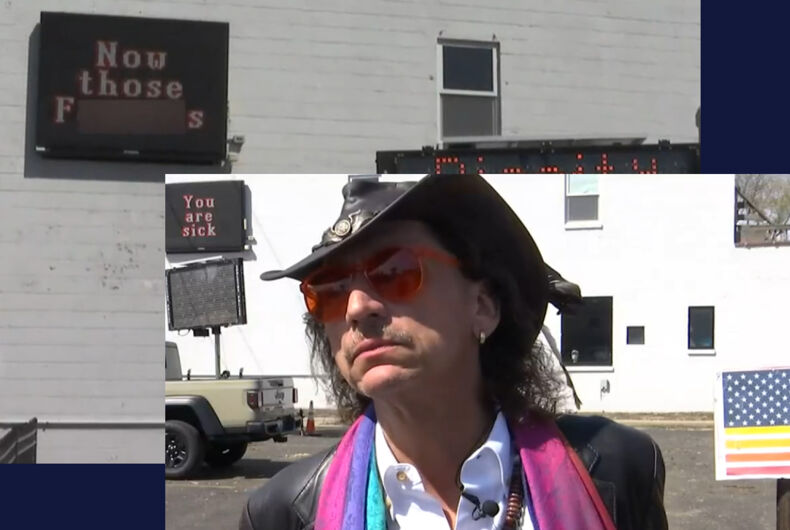 Jamie Boyce joining the protest against his own signPhoto: Screenshot/LGBTQ Nation Composite

A sign on the side of a business calling people “faggots” angered LGBTQ people in a Wisconsin town, who went so far as to organize a demonstration outside of the establishment.

But James Boyce, the owner of the building and the man who put up the sign, says that the offensive sign was an attempt at humor gone awry and was a statement about “communism.”

He even joined the protestors, holding up rainbow memorabilia, rainbow American flags, and cheering on his own detractors, less than a day after claiming the people against his message have “evil in their hearts.” He also passed out letters, “explaining” the message to those protesting it.

Boyce owns the property encompassing Krieger Jewelers in Appleton, Wisconsin. Using an LED display sign on the side of the business’s building, Boyce displayed a message that used the word “faggots.”

“Where did the faggots… Put My Head?… I’m Joe McCarthey [sic] … I was right,” it displayed. Other reports of the sign show that it also read, “Now those faggots….”

Boyce claimed it was taken from a sketch shown on Saturday Night Live. He didn’t realize there was anything offensive about the slur.

“I put Joe McCarthy on it and it was talking about communism. I didn’t realize he was – that he was so much [focused] with the homosexuals. I thought it was more communism,” he told WFRV at first.

“I was a little ignorant of that that it would be such a lightning rod.”

He also claimed that the sign was about “the incompetence of government.”

“There’s no possible way that it can be misconstrued,” Kathy Flores of the LGBTQ organization Diverse & Resilient said. “In the Fox Valley, 83% of our suicides are LGBTQ youth.”

Even the “third generation family owned” jewelry store denounced the statement, saying it didn’t reflect their beliefs and values in a Facebook post.

“The views and the opinions put on the sign DO NOT represent the views and opinions of the store management or the employees,” the business wrote.

They further explained that Boyce “does not handle social media or the day-to-day operations of the store,” and he was being made aware of complaints. The post stressed that management and employees deserve respect as “circumstances are beyond their control” regarding the matter.

Local officials stressed that the speech was protected by the Constitution, and they couldn’t ask Boyce to take it down. So they took alternative measures. The town’s mayor, Jake Woodford, had a counter-sign put up that made it clear that “hate has no home here.”

There’s a privately-owned and operated sign in Appleton with some hateful language on it. The sign and the speech are constitutionally-protected, so we put up our own sign nearby: “Hate Has No Home Here”

Woodford explained that the sign has history of complaints.

“We’ve received a number of complaints both in the mayor’s office and in other city departments, and it’s an issue that we continue to look into,” Woodford said. “Our understanding at this point is the speech on that sign is constitutionally protected.”

Boyce issued an “apology,” saying, “I guess I would apologize for that. I have no homophobia whatsoever. I would like people to know that I have nothing but love in my heart.”

But others in the community wanted to send a message further condemning the display of the slur, and a protest was organized.

“It’s an unacceptable term that I don’t think, anyone, has used… in decades,” organizer Helen Boyd said. “It’s not a joke to us.”

That apparently set Boyce off. He did an interview with local ABC affiliate WBAY that aired the day before the protest, railing against the police, local officials, and community members for encouraging criticism of him.

While he maintained that he felt “very badly that my words were mistaken,” he mocked those that made their opposition to his message clear in a phone call.

“These people coming against me have evil in their hearts. I’ve talked to them, and they shake, they can’t handle themselves, and then the police department puts up its sign to encourage this against me. This is very scary, ladies and gentlemen. It’s very scary,” Boyce said.

But by the time the protest came to the property, he did another pivot, arriving early to hand out printed letters explaining how the original sign came about.

“I just did… another thing to show that I’m not talking about people, and I’m not racist and I’m not homophobic,” he told WFRV about changing the new message. Boyce wore a rainbow-colored scarf, carried a block depicting a Pride-striped American flag on the end of a pole, and also had a Pride-colored block with him.

The letter’s contents “were full of hate speech and him trying to explain why it was okay for him to use the words that he did,” protestor Abby Ringel said.

Boyce told WBAY, “I’m here to support everyone cause I love everyone, I have no hate in my body at all, I’m not racist or sexist, I’m very outspoken and I say dumb things sometimes trying to make political points.”

“I’ve always supported everyone. I’m a priest and a shaman,” he claimed.

But protestors asked him to leave, and he eventually did.

“Why would he show up, like he verbally attacked an entire group of people and then comes out here and thinks he can make nice?” Ringel said.

“Jamie Boyce actually lives in my District and I just tried to help him understand the word itself is offensive and you’d have to live under a rock not to understand that,” she said.