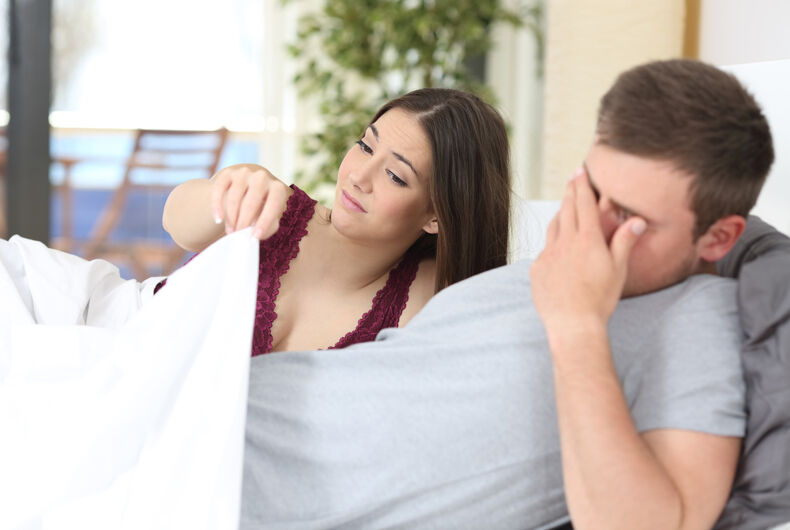 Evangelical Christian men may be more insecure about the size of their penises, according to a study published in last month’s Journal for the Scientific Study of Religion.

The authors were testing whether participation in the Evangelical communities makes men insecure since so much Evangelical rhetoric is about the male member. This is evident when looking at how much Evangelicals talk about the “complementarity of the sexes,” the authors said, or the idea that God created men and women for specific roles that define how entire communities operate.

Related: White Republican evangelical Christians own the most guns. Why?

“Writings of prominent evangelical thought leaders have for decades relied on phallic symbolism and even explicit phallic references to either valorize physical strength or, more often in the negative, castigate Christian men for their lack of ‘manliness,'” the authors wrote. “Our findings provide important insight” into Evangelicals’ “views that equate masculine worth with physical size and strength either centering on or symbolized by the penis.”

The authors of the study did not measure people’s genitalia because they were concerned about insecurity, not size. Nor did they rely on surveys because, they said, this is a topic that a lot of people are not very honest about.

Instead, they looked at aggregate data from Google about searches that would show insecurity about penis size, like “male enhancement,” “male enhancement pills,” “Extenze,” “make penis bigger,” and “grow penis.”

And they found that the more Evangelicals that there are in a state, the more likely they were to search for these terms. “Male enhancement” was the term that had the strongest association with Evangelicals.

The researchers even controlled for confounding factors like marital status, age, political ideology, race, and education, and the relationship was still there.

“Despite assurances that character or Christian devotion matter in determining leadership arrangements, women, no matter how committed or gifted they are, are seldom permitted to serve as elders and would be discouraged from leading their families,” wrote authors Samuel L. Perry of the University of Oklahoma and Andrew L. Whitehead of Indiana University-Purdue University-Indianapolis.

“The most fundamental determinant of social status is neither character nor devotion, but the physical marker of God‐given masculine authority (the penis) and, nearly as important, the concomitant embodied performance of that masculine authority.”

Complementarianism shows up often in Evangelical opposition to LGBTQ equality, used as an argument for years against marriage equality and now against transgender rights.

The connection between gender roles and genitalia is often explicit in Evangelical communities. The authors cite James Dobson, one of the most prominent Christian conservative leaders of the 20th century and the founder of Focus on the Family and the hate group Family Research Council, who was also a trained child psychologist.

His books on child-rearing were focused on exerting parental power over children and pushing them into defined gender roles, saying in 2001 that God gave boys a “masculine will to power” but that liberal elites will make them “feminized, emasculated, and wimpified.” He exhorted fathers to instill masculinity in their boys while they’re young to prevent them from becoming gay.

A father “can help his son learn to throw and catch a ball,” one of Dobson’s newsletters once said. “He can teach him to pound a square wooden peg into a square hole in a pegboard. He can even take his son with him into the shower, where the boy cannot help but notice that Dad has a penis, just like his, only bigger.”

“Social scientists demonstrate that society‐wide conceptions of masculinity wrapped up in physical endowments can lead many men to feel chronically insecure, on a quest to constantly prove their worth as men to themselves and others,” wrote Perry and Whitehead.

While the researchers don’t know if it’s just cis men doing these Google searches, they said that if it’s women, then that “would provide additional support for the idea that such a subculture of phallocentric masculinity has so pervaded the region that even women feel the need to remedy their male partner’s or spouse’s perceived physical shortcomings.”