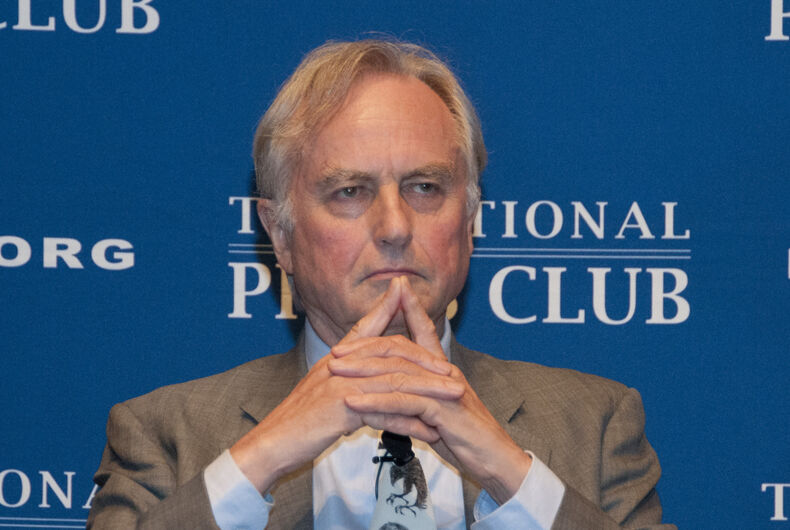 The American Humanist Association (AHA) just announced on their website that they are retroactively taking away their “Humanist of the Year” award from biologist and prominent atheist author Richard Dawkins, citing his statements attacking transgender people.

The group gave him the award in 1996 for his work in bringing science into the public discourse, but now say that he doesn’t represent their values any longer because he has been attacking transgender people under “the guise of scientific discourse.”

The AHA defines humanism as an ethical belief system without a god in which people “aspire to the greater good.” They say that Dawkins doesn’t represent those values anymore due to a recent tweet.

Rachel Dolezal is a white college teacher who said that she was Black for years before she acknowledged that she was “born white to white parents” in 2015.

“It was also not my intent to ally in any way with Republican bigots in US now exploiting this issue,” he said in response to criticism.

But the AHA had had enough.

“His latest statement implies that the identities of transgender individuals are fraudulent, while also simultaneously attacking Black identity as one that can be assumed when convenient,” the AHA wrote in their statement. “His subsequent attempts at clarification are inadequate and convey neither sensitivity nor sincerity.”

“Consequently, the AHA Board has concluded that Richard Dawkins is no longer deserving of being honored by the AHA, and has voted to withdraw, effective immediately, the 1996 Humanist of the Year award,” the statement concludes.

Dawkins is one of the best-known atheists in American and British media and was the author of the popular book The God Delusion, where he made the case that a supernatural creator does not exist. He has generally taken liberal political positions, like opposition to the Iraq War and nuclear weapons.

The award celebrates leaders of the international business, entertainment, and activist communities who have demonstrated a commitment to social change. Less than a year after receiving it, Rowling got a call from Robert F. Kennedy’s daughter, Kerry Kennedy, to express her “profound disappointment” over Rowling’s “deeply troubling transphobic tweets and statements.”

Rowling “has chosen to use her remarkable gifts to create a narrative that diminishes the identity of trans and non-binary people,” Kennedy said at the time, “undermining the validity and integrity of the entire transgender community.”

Kennedy said that Rowling’s statements have added to an environment in which trans people are already subject to discrimination, exclusion, harassment and violence, all of which lead to high rates of homelessness, mental and bodily harm and suicide.

“The science is clear,” Kennedy continued, “Sex is not binary…. Trans rights are human rights. J.K. Rowling’s attacks upon the transgender community are inconsistent with the fundamental beliefs and values of RFK Human Rights and represent a repudiation of my father’s vision.”

“No award or honor, no matter my admiration for the person for whom it was named, means so much to me that I would forfeit the right to follow the dictates of my own conscience,” Rowling said in response, once again adding the false claim that transgender women are a threat to “the most vulnerable [cisgender] women.”