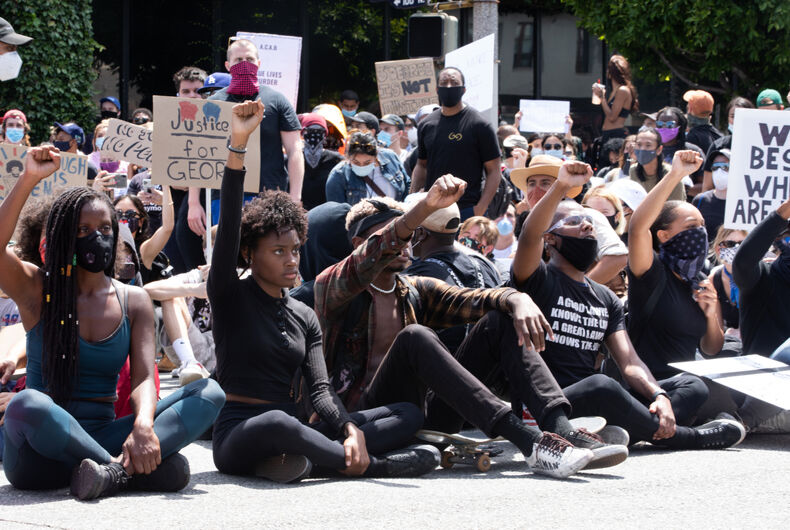 LOS ANGELES - MAY 30, 2020: Participants of protest march against police violence over the killing of George Floyd.Photo: Shutterstock

Chauvin, who is white, knelt on Floyd’s neck for several minutes as he lay handcuffed on the ground. Floyd was a Black man and his death touched off days of international protest.

Chauvin was charged with second- and third-degree murder and second-degree manslaughter. Punishments range from 10-40 years varying on the charge.

Chauvin was convicted on all three counts. He will be sentenced after a separate hearing, but his bail was revoked and he was taken into custody.

Floyd’s death, among other instances of police brutality, spawned weeks of racial justice protests worldwide after a video of the killing recorded by a teenage bystander went viral.

The verdict was met with celebration and caution in the queer community as LGBTQ people reacted online. Many leaders of the Black Lives Matter movement are part of the community.

guilty on all counts – #ChauvinIsGuilty #thankGOD

Chauvin is the part of the iceberg above the water. Whether or not he falls doesn’t change the fact the system that buoyed him must be dismantled.

A guilty verdict is reactive justice but now it’s time for proactive reform.

Justice & the beginning of healing prevail.

I was born in Los Angeles just 2 days before the Rodney King Riots began. So good to know that things have indeed changed since 1992, almost 29 years to the day. ❤️🇺🇸 #JusticeForGeorgeFloyd

This does not bring him back. And abolition is what I will continue to push for.

But I did not see that coming. Genuinely.

This was a toss-up in the eyes of the public. Remember that.

In a just world, this news wouldn't be shocking. The work continues.

GUILTY ON ALL COUNTS.
You can believe your eyes. We must address the systemic racism that murders black men, women and children. #verdict #DerekChavintrial

A much deserved guilty verdict. And let’s remember the fight for justice doesn’t stop here.

The emotion, as a young Black man in this country, to have justice prevail in the Chauvin murder trial that has captivated the world’s attention is indescribable. While millions of people breathe a sigh of relief for this accountability, there is still so much work to be done.

George Floyd’s murder pushed many people to think more deeply about how white supremacy functions in our society. Regardless of the verdict and what is said about Chauvin, we need people to stay engaged and motivated in the fight to end systems of oppression.