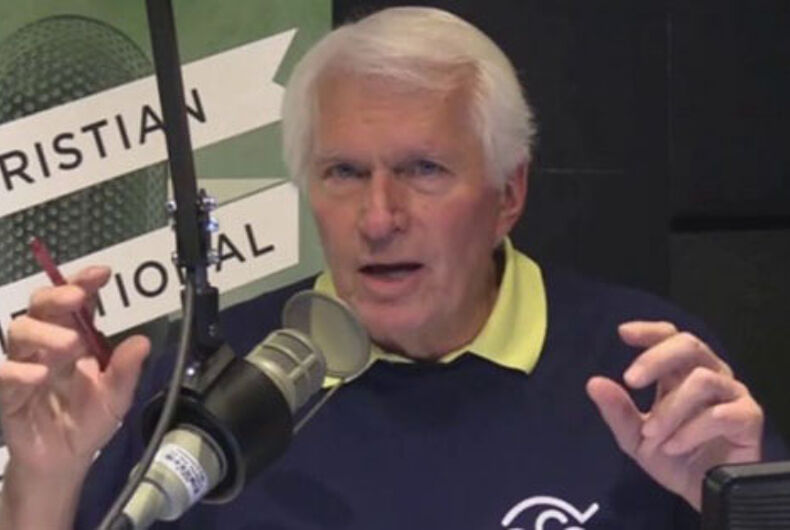 Although he has failed to file an official police report alleging theft, American Family Association radio host Bryan Fischer is doubling-down on his accusation that the rainbow belongs to God and that queer people stole it, according to Right Wing Watch.

The original allegation was posted to Twitter on Sunday, the day most Christians reserve for the public reading of scripture, which teaches followers to “love one another as you want to be loved,” and “not bear false witness against thy neighbor.”

Worst example of cultural appropriation ever: LGBTs stole the rainbow from God. It's his. He invented it. Gen. 9:11-17. Give it back.

Attempts by LGBTQ Nation to reach God for comment have proven unsuccessful thus far. But Christians and followers of other faiths have responded to Fischer in droves.

Not content to limit his claim to Twitter, Fischer took to the airwaves Tuesday, not only repeating his insistence that the LGBTQ community return the rainbow to God, but revealing he didn’t take kindly to being mocked by just about the entire universe.

The on-air extremist blasted “the rabid homosexual community” in between attacking Target for opening its bathrooms to all genders and pleading with listeners to call in with donations to the American Family Association, a hate group according to the Southern Poverty Law Center.

After boasting how many retweets his tweet generated, Fischer noted he had seen “a lot of conversation about the rainbow flag over the weekend.”

He did not explain that was in tribute to the man who created the first Pride flag, Glibert Baker, who died Friday at 65.

Then the radio preacher explained what the term “cultural appropriation” was to his audience, to make his case for theft.

“It occurred to me the worst example of cultural appropriation in history is the LGBT community stealing the rainbow from God.” Fischer said. “God invented the rainbow — look at Genesis 9:11-17 — He invented it, it’s His thing, He put it in the sky as a promise that he would never again destroy the earth through a flood. Are you listening Al Gore? Al Gore, you do not need to worry about the planet being destroyed by floodwaters. Why? Because God has put His rainbow in the sky to let you and everybody else know, ‘I’m never going to do that again.’”

Fischer’s only submission of evidence is one line in a 2,700 year-old book that provides no attribution or citations for verification. A check of a rainbow that appeared following Tuesday’s rain in New England revealed no visible copyright, trademark or tag, such as “Property of God.”

And although there were no witnesses to this alleged theft, LGBTQ Nation did find a prominent rabbi who is a past president of the World Union for Progressive Judaism to offer his expert testimony on Fischer’s claim:

“Absurd! That is what I think of it,” said Rabbi Stephen Fuchs, author of two books on interpreting scripture and rabbi emeritus at Congregation Beth Israel in Connecticut. “I am not a biblical literalist. But I absolutely believe that God will never destroy the earth again. But as I have written, there is no promise that we humans won’t destroy it, and we are, I fear, well on our way.”

Put another way: the rabbi challenged Bryan Fischer to be either part of the solution, or part of the problem.

Should LGBT people be worried about Gorsuch making it onto the Supreme Court?