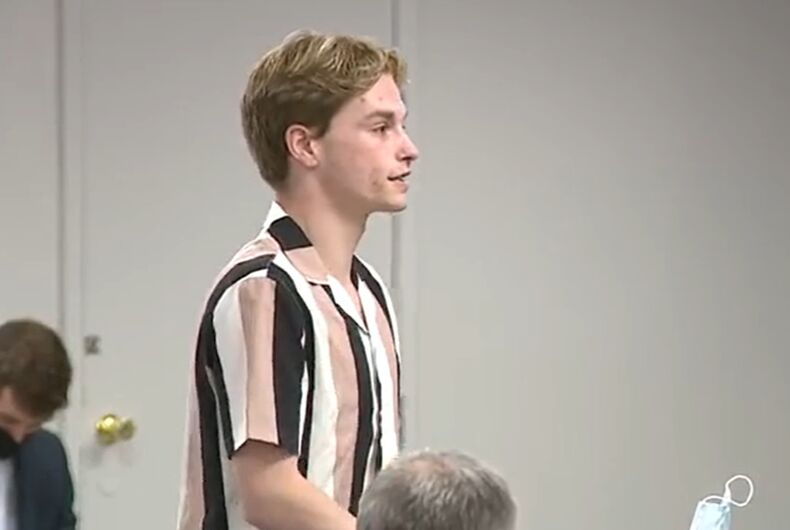 Trevor Wilkinson at the school board meetingPhoto: Facebook video screenshot

A gay teen in Texas spoke at his local school board meeting about how he is being denied an education because he wore nail polish to school.

“This isn’t about me anymore,” said Clyde High School senior Trevor Wilkinson. “It’s about a discriminatory, sexist policy that needs to be changed.”

Related: 100 teen boys shocked administrators when they all wore skirts to school

Wilkinson went to school after Thanksgiving this year with nail polish on and he was given an in-school suspension (ISS) because he violated the dress code, which bans male students from wearing nail polish and make-up. He was told he would stay in ISS until he removed the nail polish, but he’s not giving up without a fight.

“I got my education taken away from me for something as minor as painting my nails because it’s against the dress code,” he told the Clyde CISD school board, wearing nail polish.

Wilkinson said that the ACLU had already sent a letter to the school district before he even got his ISS that their dress code might violate civil rights laws.

He then explained why the policy is so harmful to LGBTQ students.

“Having a double standard like this only shows that Clyde doesn’t accept kids for who they are and they shouldn’t be themselves because the very people that are supposed to create a safe environment can’t accept them,” he said.

“It’s not too late to be on the right side of history and I dare ask you guys to join,” the teen continued. “I understand that you guys have traditional values and I respect that, but to get respect you also have to give it. America is progressing, we’re staying up-to-date with trends, we’re modernizing as a whole and nothing will stop that.”

“Traditional values are great, but change is inevitable. At what point do we look at the bigger picture and realize that this isn’t 50 years ago? We’re all supposed to be equal, not having our freedom of expression suppressed, not having our voices not heard because grown-ups are taking three steps back instead of forward.”

“Diversity is what makes this country so beautiful.”

Wilkinson’s story went viral after he started a Change.org petition to change the school policy, which has gotten over 333,000 signatures so far.

The school board, though, isn’t budging. Superintendent Kenny Berry said in a statement that “the District expects students to abide by established rules of conduct” and that the dress code will not change before the district’s “annual review of the Student Handbook.”

“Until that time, the District will assure that no student is treated in a discriminatory or inequitable manner.”

Mike Pompeo threw a Christmas party for State Department staff. No one showed up.