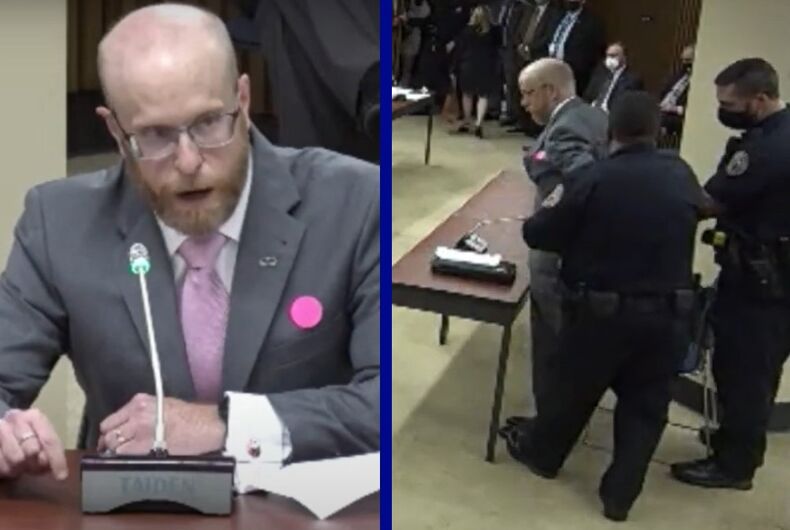 “It was just shocked sitting there in jail thinking that this is what happens when you speak to people about how their proposed laws are affecting your children,” Chris Attig, 49, told them. “They don’t want to hear it. They put you in jail.”

Related: At least four teens have attempted suicide after Arkansas bans trans youth from getting healthcare

Video has been shared online of Attig being dragged out of the legislature last month by officers while defending the rights of transgender minors who, like their 22-year-old son did, need access to gender-affirming medical care.

The Arkansas House was holding a hearing on H.B. 1570 on March 9, which banned doctors and other health care professionals from providing gender-affirming health care for transgender minors.

The so-called “Arkansas Save Adolescents From Experimentation (SAFE) Act,” will ban gender-affirming care of any kind from being given or even offered for consideration to trans youth. That includes surgery (which is not performed on trans minors anyway), hormone therapy, and reversible puberty blockers.

“No matter what happens here today, you are loved,” Attig testified, talking to trans youth. “You are loved.”

“Your time is up,” said State Rep. Jack Ladyman (R) near the two-minute mark.

Attig wanted to finish his pre-written speech, so they kept talking. The legislators cut off their mic, but they kept going until they were escorted out of the building while everyone sat silently.

Attig said that they were taken to jail, where they stayed for several hours and now faces a charge of disorderly conduct. They said that representatives from the SPLC designated hate groups Alliance Defending Freedom and Family Research Council were allowed to talk for up to 40 minutes and that only opponents of H.B. 1570 were held to the two-minute time limit.

Attig’s son is 22, so he won’t be denied medical care due to the bill. His father says that he’s loved and happy and has a boyfriend.

But Attig worries about the message a bill like H.B. 1570 sends to the state, that it is permissible to attack transgender people.

“Whether or not these laws are targeted at somebody above or below the age of 18, the singular message that they send is it is OK to bully and persecute people who are trans,” they said. “It says, ‘The legislature is doing it, why can’t I?’”

The bill was passed by the legislature but vetoed by Gov. Asa Hutchinson (R), who said that government shouldn’t be involved in medical decisions and the bill was “an example of where restraint is better than overbroad actions that interfere with important relationships in our society.”

The state legislature overrode his veto and trans youth and their families in the state are now panicking, either planning to move to a different state, get hormones on the black market, or falling into despair as the life-saving care will be denied starting in July.

One doctor who works with transgender youth in Arkansas said that she knows of at least four young trans people who have contemplated suicide since H.B. 1570 was passed.

“My families are in a state of panic, asking what state should they move to, saying their child is threatening to kill themselves,” Dr. Michele Hutchison said. “They want to know what they should do next and we don’t have a clear answer for them.”

The law has already made transgender youth and their families afraid, and they’re looking for solutions. Dr. Hutchison is worried that families will also turn to the black market.

“They’re going to find a way to get them, and it’s going to be dangerous because they won’t be monitored for side effects,” she said.

Others may not have the resources to do even that.

“You’re basically kicking these people when they’re down,” Dr. Stephanie Ho said. She has cared for about a dozen trans teens in the past. “They have very little resources to begin with and now you’re going to make them choose between rent and their child’s life.”