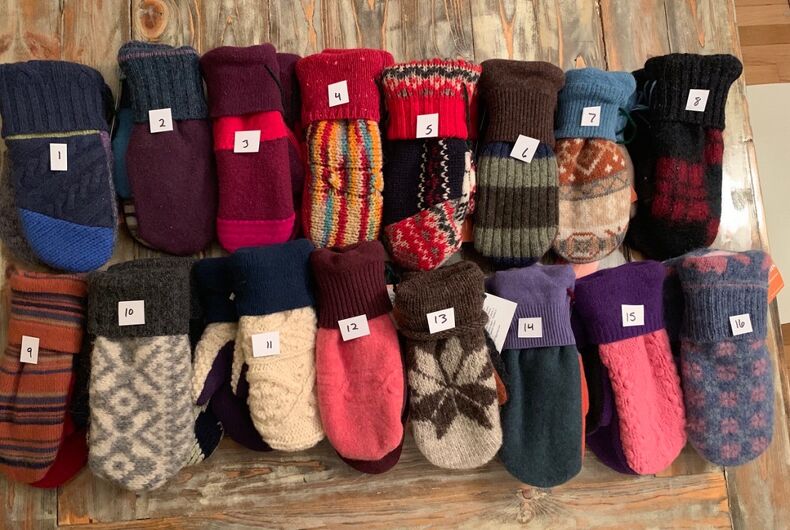 Sen. Bernie Sanders (I-VT) was one of the few attendees at the historic, but limited attendance inauguration of Joe Biden as president on Wednesday. A shot of the 79-year-old — sitting legs-crossed, socially distanced from others, with a disposable mask and very large and distinct mittens on — went viral immediately.

Sanders, who mounted effective, if not successful, campaigns in two presidential primaries, is no stranger to internet fame, especially for his appearance. This time, though, it was the mittens he wore that were just as much of a reason for the viral moment. And the mittens come from an elementary school teacher, mothering a five-year old with her same-sex partner.

Related: Joe Biden got inaugurated, so why is Lady Gaga trending?

Jen Ellis made the “swittens,” as the large, hand-weaved wool mittens have become known as, in 2016 as a gift for several people that worked at her daughter’s preschool. One of those people was the preschool’s owner Liza Driscoll, who is Sen. Sanders’ daughter-in-law. Ellis made an extra pair for Driscoll to give to Sanders, and the rest is online history.

This isn’t the first time that Sanders and the “swittens” has caught the internet’s eye, but their appearance at the Inauguration made them even more popular than before. Even LGBTQ Nation got in on the meme on Twitter while live-tweeting the Inauguration festivities.

Sanders also wore the same beige windbreaker coat in a 2020 campaign ad, which created a meme of its own.

In all the inauguration fashion news, let us not overlook Senator Bernie Sanders’ mittens pic.twitter.com/BlZivZ8cMP

I’m not in Washington, but I assure you I’ll be channeling my best Bernie impression from my house: pic.twitter.com/J2TargadUs

Welp. It’s time for me to pack it up and take my tweeting back on home. pic.twitter.com/ggop6IVg1x

Ellis and her family lives in Essex Junction, a village of about 10,000 people just about six miles from downtown Burlington, where Sanders served as mayor for years prior to becoming a U.S. Senator.

Refinery29 has praised the “swittens” as “Cozy & Casual Vermontcore At Its Etsy Finest.” Still, Ellis isn’t leaving her own life as a teacher to meet the internet’s needs anytime soon.

“Honestly, I don’t really do it a lot anymore. I’m flattered that they want them, but there are lots of people on Etsy who sell them and hopefully people will get some business from them,” she told Jewish Insider, “but I’m not going to quit my day job. I am a second grade teacher, and I’m a mom, and all that keeps me really busy.”

After gifting the “swittens” via Driscoll, Sanders has worn them on numerous occasions, and they even became known as “Bernie Mittens” — but the senator and Ellis have yet to formally meet.

“Someday, maybe he’ll be walking down Church Street, and maybe I’ll just come up and introduce myself and say hi,” Ellis said.

Although she is a huge supporter of Sanders, Ellis is still most elated by the fact that a woman is now vice president of the United States.

“I’ve tried not to let all of the mitten business overshadow the gloriousness of sitting with my five-year-old daughter and my partner and watching the first woman be sworn in as vice president. That’s amazing,” she said.

Now the Sanders family is making the meme an even more warming story, as the meme image is available for order on sweaters and shirts. Bernie’s wife, Jane O’Meara Sanders, says that proceeds will go to charity. Sanders talked about Ellis in recognizing the meme in an appearance on Late Night with Seth Meyers, noting that Ellis has said she “is overwhelmed” by all the recent attention and interest in the mittens.

Bernie’s mittens are made by Jen Ellis, a teacher from Essex Junction, Vt. She gave them to him 2+ years ago and was surprised when he began wearing them on the campaign trail. They are made from repurposed wool sweaters and lined with fleece made from recycled plastic bottles. pic.twitter.com/ErLr29lY2t

The approximate size of various ocean animals with a Bernie for scale. A Thread. 🧵 pic.twitter.com/4KsY1hof4m

“We have some good coats, as well,” he adds.

The bigger takeaway from this is that @BernieSanders came bundled with some bitching gloves.

No one can look at those gloves and think he shouldn't Chair the Senate Budget Committee. https://t.co/ld5QebS9Na

Thanks for all the interest in Bernie's mittens! It truly has been an amazing and historic day! I'm so flattered that Bernie wore them to the inauguration. Sadly, I have no more mittens for sale. There are a lot of great crafters on ETSY who make them. -Jen Ellis,

Bernie pivots conversation away from the memes and talks about the teacher who made the mittens.

Made in the USA, Union printed. 100% of proceeds go to Meals on Wheels Vermont. https://t.co/Nv8Ng0K217 pic.twitter.com/yfXOsp3acX

Our son Dave @drscll worked with @burtonsnowboard founder Jake Burton on a limited edition jacket with @BernieSanders face on the back. Bernie really liked it, so Dave got him one – without his image – for Christmas. Vermont jacket, Vermont gloves, Vermont common sense! https://t.co/P9NLMVPMgh

With proceeds going to charity. https://t.co/YmbJlDVka7

Thanks! Looking forward to ordering one 😊 pic.twitter.com/qzJxBgDWje