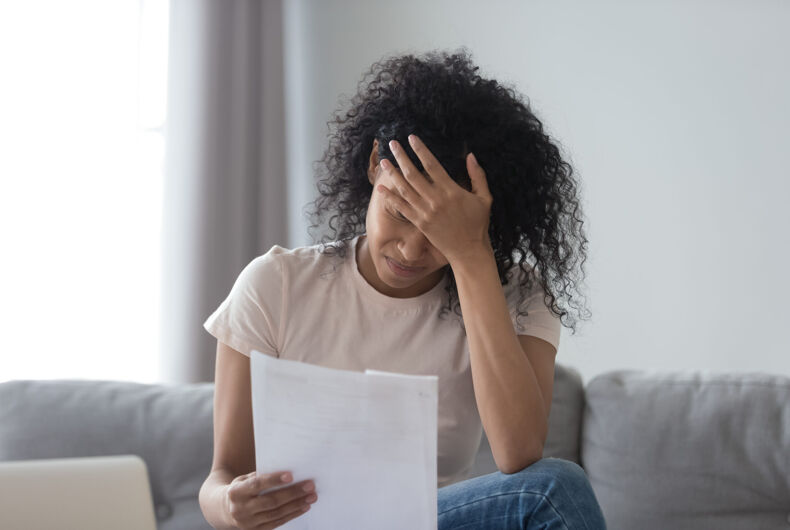 Following the U.S. Supreme Court’s block of a nationwide eviction moratorium last week, a new survey has found that nearly half of LGBT renters who are behind on their rent are afraid that they’ll be evicted within the next two months.

The survey, conducted by the Williams Institute, showed that 19 percent of LGBT respondents were behind on rent payments. Of those, 47 percent said that they feared being evicted within the next two months.

As of July 5, roughly 3.6 million Americans say they face eviction within the next two months, according to the U.S. Census Bureau’s Household Pulse Survey.

“As the Census Bureau reported, nearly 20 percent of LGBT people had experienced a loss of income [during the ongoing COVID-19 pandemic], compared to 17 percent of non-LGBT people,” the survey’s authors wrote. “Further, over a third of LGBT adults reported being in a household that had difficulty paying for usual expenses.”

As of August 10, roughly 3.4 million Americans remain out of work. Household income is also expected to drop as enhanced federal unemployment benefits will expire nationwide on Labor Day, September 6. On top of that, nearly half of American workers nationwide don’t earn enough money to afford monthly rent in a one-bedroom apartment, according to data from the National Low Income Housing Coalition.

A worker would need to earn about $20.40 an hour to afford a modest one-bedroom rental in most U.S. cities, the coalition said. But the U.S. median wage is about $21 an hour, and the federal minimum wage is only $7.25 an hour.

The national minimum wage hasn’t been increased in 12 years. In 2021, congressional Democrats floated proposals to gradually increase it to $15 an hour. They said the increase could pull 28 million full-time workers out of poverty by 2024. However, Republicans blocked it, saying it would harm businesses already impacted by the pandemic-related economic downturn.