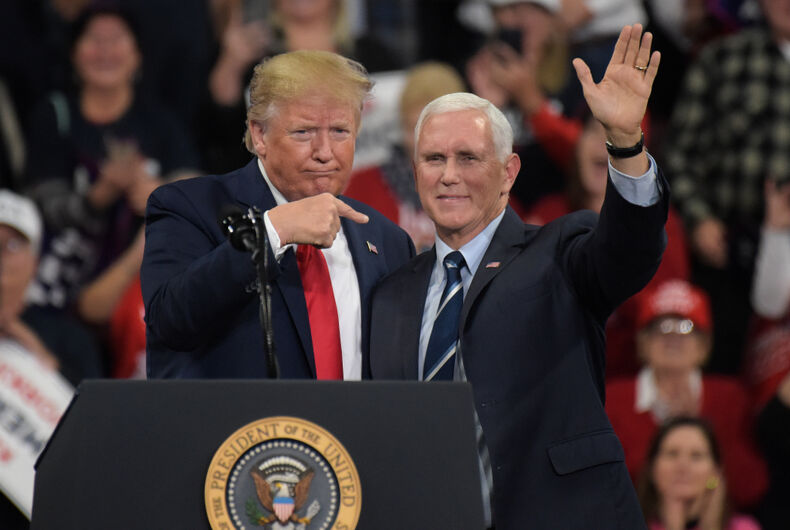 We know that the Trump administration is finally coming to an end — despite President Donald Trump’s (R) refusal to concede, still, with less than 100 hours before Joe Biden’s inauguration — because we can see everyone has all but given up on maintaining a semblance of their duties.

All, except for Mike Pence.

Related: The top seven jobs for Ivanka Trump & Jared Kushner after they leave the White House

Instead of Trump meeting with Biden and offering him even a semblance of well-wishes, Pence is the only one in the administration who mustered some sense of dignity and called his successor — Kamala Harris — to offer congratulations and assistance.

Now that he’s essentially blocked off from Trump’s inner circle and will likely transition back into relative unimportance — possibly for good — after leaving office, Pence gets to dress up and play President, at least with those that will still take his phone calls and listen to him.

It wasn’t like Trump administration staff were really living up to their oaths and supposed morals before, but at least they were giving us the impression that they were. Now, there’s no incentive.

Thus, the White House is in shambles. Public information officials are not offering information on the President’s schedule and are not taking questions from press. Most people inside the administration don’t even know what’s going on (as usual), and all the information available about the inner workings presently comes from the anonymous sources that are whispering to reporters.

So while the other Cabinet members are resigning (or announcing their resignations within days of their jobs ending anyway), it’s been left to Pence to continue on with the Presidential-like sham image that the administration tried — and oft-failed — to maintain for the last four years.

The one thing Trump and company has consistently accomplished in office is breaking precedence and traditions, while stretching constitutional limits afforded to the office of President. Refusing to even acknowledge the existence of his successor, even informally, is yet another example.

In contrast, the Obamas stood before the world in 2016 and quietly passed the White House over to a family who had campaigned on how terrible and evil they were, and made his political bones on the racist theory that Barack Obama was not even a legitimate citizen.

Barack Obama met with Trump the day after his election victory became apparent. Michelle, who put up with the blatantly racist, and often transphobic, lies and hatred that the right had directed at her, gracefully passed the reins of First Lady — over to a woman who now, can’t even bother to sit for a phone call with her successor, Dr. Jill Biden.

What are the Trumps doing instead? They’re focused on moving out, packing away things that may or may not be theirs. Trump’s allies, if they haven’t fully abandoned ship, are trying to get last-minute pardons, while the family whines about the President’s Twitter ban, or gets in a “panic” about what they’ll do next, or trying to show off their accomplishments at the last minute.

President Trump won’t even bother attending the inauguration, and considered leaving the White House prior to Inauguration Day, which would leave it unoccupied for the first time in its history.

Barring any last minute attempts to stay in office (which is still under consideration, since he’s meeting with MyPillow CEO Mike Lindell, who was photographed with suggestions on how to do so), he’ll be flying to Florida — ro a region full of residents that doesn’t even want him and other parts of the state where his brand isn’t welcomed anymore. Donald’s not the only member of the Trumps trying to figure out where to live, either.

Pence, on the other hand, has little of a persona left to maintain. Even he retreated the nation’s capitol and considered skipping town for the rest of his term, scared of what the Trump fanbase might do to him once he’s no longer in office. Now, he’s trying to save face now that the Trump brand has become toxic, so he’s positioning himself in the leadership role for once.

It’s fitting, since for more than four years, Pence has been the sub to the president’s dom. No matter how egregious Trump’s behavior or how outrageous his lies, Pence defended Trump every step of the way. He even used to drool repeatedly about the President’s “broad shoulders.”

Pence was nothing but a politically-convenient pawn of Trumpism to begin with. His selection as the Vice Presidential nominee in 2016 was meant to give some sense of political experience to the would-be administration, but also please the religious right. It succeeded, and they were elected.

Pence fit the ideal that both Trump and evangelicals needed to the tee: A proudly anti-LGBTQ, religious, timid and uncharismatic person that would stand behind any agenda, and shield them from being cast off as the unpopular, far-right peddlers they really are, without trying to take over.

Pence came in as one of the few people in the administration that actually had experience in government, having served in both legislative and executive bodies. That’s why he was an outsider in Trump-world to begin with. In office, Pence was cast off from the administration’s inner workings, and it was far from a sure thing that he would even be asked to stay on the ticket for reelection.

That’s why QAnon conspiracists have been certain that the late John F. Kennedy, Jr. would rise from the dead to become the new Vice Presidential nominee — that’s how virtually nonessential Pence was to much of Trump’s supporters.

Pence was regulated to shielding Trump, seeing his agenda through in Congress — although Mitch McConnell did that well on his own — and dealing with tasks that Trump found too important to deal with himself, like the country’s coronavirus response, although Trump miraculously found interest in it when it became the heart of the news cycle.

When Trump learned that Pence had a part in certifying the election results — albeit a ceremonial one — he immediately cast his hopes on staying in power on him. That ended with a Trump-supporting mob storming the Capitol while Pence was inside, although he was hearing challenges to the election results at the time, like Trump wanted, anyway. Trump did nothing to discourage them from trying to attack Pence, leading to hours of rioters stampeding through the Capitol building, possibly in search of him.

Pence did the bare minimums of his job, and Biden’s election victory was certified. As usual, the facts upset Trump and his ilk, and they have now shunned the Vice President for not buying their leader’s nonsense.

Now, his own political career is as good as over.

Despite support from many legislators and many around the country, Pence repeatedly refused to support efforts that would remove Trump from office and turn the commander-in-chief duties to Pence. Even after the Capitol riots, Pence and the Cabinet decided against invoking the 25th Amendment, which has a clause that allows for a President’s temporary removal due to ‘inability’ to serve properly. Instead, Pence thought it was best to do nothing afterward.

That’s why, as a recent Lincoln Project ad noted, Pence has already made his campaign argument for a potential run for President in 2024. “Other Republicans abandoned the president while yet more continue to support him,” the ad intones. “But Mike Pence, using his decades of experience, knew that the best thing to do was nothing at all.”

“No one has done nothing better than Mike Pence.”