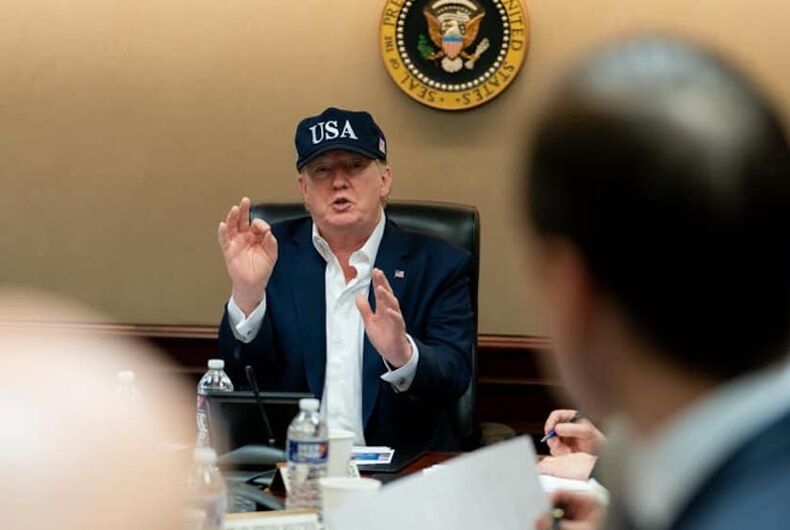 If any logic can be found in Donald Trump’s words, actions, and reasons, then we must center our investigation on the fourth letter of the alphabet: the letter “D.”

Not only does this president’s first name begin with “D,” but in understanding Donald, so too do the words “Deny,” “Deflect,” “Distract,” “Disengage,” “Demean,” “Dehumanize,” “Dishonest,” “Destructive,” “Deficient,” “Dangerous,” and we could go on almost infinitely.

Throughout the coronavirus pandemic, he has denied its severity and impact on our nation. He has demeaned the Chinese by calling it the “China virus” and “Kung flu” and attempted to deflect criticism of his deficiencies in the crisis from the onset.

Donald inaccurately blamed the Obama administration for the shortage in testing devices and he was dishonest when he claimed Obama “didn’t do testing” during the swine flu epidemic of 2009.

“I don’t take responsibility at all,” Donald deflected, “because we were given a set of circumstances and we were given rules, regulations, and specifications from a different time.”

His dishonesty about the facts of the pandemic in our country has been epic, even in Trumpian terms. His claims that “anyone who wants a test can get a test” have been wrong to this very day. He keeps revisiting his claim that soon the coronavirus will go away on its own.

He calls current historic spikes in several states, especially in the south, southwest, and west as merely brief flames from previous embers, and that the nation under his watch has been the envy of the world.

“I think we have one of the lowest mortality rates in the world,” Trump said on Fox News in an interview with Chris Wallace on July 19, 2020. Wallace fact-checked the president by stating that his numbers came from Johns Hopkins University, which classified the U.S. seventh in the world in terms of mortality rates, ahead of the U.K. and worse than Brazil and Russia.

Reports indicate that Trump has grown bored of the pandemic, and since he has the attention span of a tree stump, he has attempted to disengage, even from his Coronavirus Briefing.

From day one when the first case of the coronavirus hit the U.S. six months ago, Trump’s focus during this election year centered on two main strands: putting the economy over public health, which includes reopening the nation’s schools regardless of whether this places students, teachers, and staff at risk for infection, and highlighting issues of so-called “law and order.”

To divert attention away from the devastating tragedy of his failed leadership during a crisis, Trump uses the technique of throwing  shiny objects at the media, whom he believes will follow and circle as moths to a flame.

His latest tactic involves the sending of federal agents in camouflage gear and unmarked vehicles to arrest and detain Black Lives Matters demonstrates who are largely peaceful in the streets of Portland, Oregon.

The Trump administration never contacted local officials in advance before the agents invaded their city. Most local officials, including Oregon’s governor, Portland’s mayor, and U.S. Senators and Representative serving the area, have all called for the administration to evacuate and allow protestors their constitutional right of assembly.

In an Oval Office press conference with reporters, Trump asserted that federal agents in Portland had “done a fantastic job.” He justified his action by arguing that the city was “totally out of control” and blamed the governor and other state officials for not asking for his help.

Prior to the uninvited federal invasion, the demonstrations had diminished to a few dozen peacefully protesting each evening. Trump’s action reignited the situation and made it significantly worse.

Trump has threatened to send agents to other cities throughout the country:

“I’m going to do something — that, I can tell you,” Trump told reporters in the Oval Office. “Because we’re not going to let New York and Chicago and Philadelphia and Detroit and Baltimore and all of these — Oakland is a mess. We’re not going to let this happen in our country. All run by liberal Democrats.”

Trump has deployed federal agents in his “law and order” campaign at a time when he is sinking in virtually every election poll against his Democratic presidential rival, Joe Biden.

He believes that by sending agents around the country, particularly in Democratic strongholds, he will embarrass local and state officials, shore up the baseness in his base of support, and divert attention away from the soaring coronavirus cases and deaths and from his failed leadership.

The film portrays a political spin doctor and a Hollywood movie producer who concoct a war in Albania to distract voters from a sex scandal in which the president of the United States was caught making advances on an underage girl in the Oval Office merely weeks from the election.

As it turned out, the war helped the president to be reelected.

Well, Donald, you are daft if you are depraved enough to believe that your devious, deceptive, and dishonorable conduct before and during your time in the Oval Office will divert attention away from your disloyal and dangerous actions.

The Blue Wave is coming.

J.K. Rowling threatened a children’s website unless they apologized for “implying” she’s transphobic