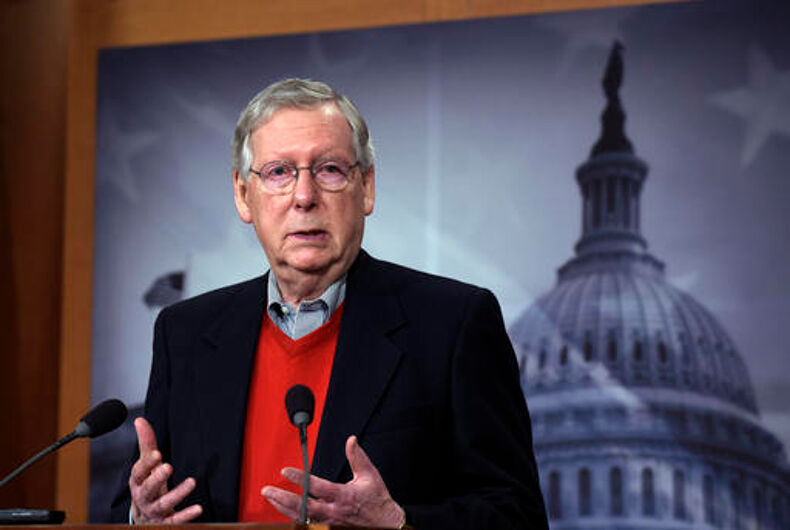 During the political campaigns in Massachusetts in the early 1800s, under the direction of Governor Elbridge Gerry, the Democratic-Republican Party unfairly manipulated electoral district boundaries, some in the shape of a salamander, to favor the election of candidates of the ruling party. This politically biased process has come to be known as “gerrymandering” (Gerry + salamander).

I thought about this term, named after an individual and an action they are associated with, as I ruminated on Senate Leader Mitch McConnell’s blatant and now infamous statements negating his responsibility to remain open and impartial in Donald John Trump’s impending Senate Impeachment trial.

Related: Integrity is on trial during Donald Trump’s impeachment hearings

Before the trial in December 2019, he declared categorically, “I’m not an impartial juror.” He continued, “This is a political process. There is not anything judicial about it. Impeachment is a political decision.”

McConnell gloated on Fox News to host Sean Hannity that he would be in “total coordination with the White House counsel’s office and the people who are representing the president in the well of the Senate. Everything I do during this, I’m coordinating with the White House counsel,” he added. “There will be no difference between the president’s position and our position as to how to handle this.”

“I solemnly swear (or affirm, as the case may be) that in all things appertaining to the trial of the impeachment of Donald John Trump, now pending, I will do impartial justice according to the Constitution and laws: So help me God.”

Yet, throughout the Senate’s so-called impeachment “trial,” Mitch McConnell had no inclination toward impartiality — stonewalling and lining up Republications to come together in successfully barring relevant documents and witness testimony from getting in his way, as per direction of the president and his team.

And in the process, McConnell has led a movement not only to shred Congressional oversight duties of the executive branch as enumerated in Article I of the U.S. Constitution, but he has also shot to bits the Senate’s nickname as “the world’s greatest deliberative body.”

So I coined a new term, “mitchmatching,” which I define as “the collusion or matching of a jury foreperson with a defendant’s legal team to fix the outcome of a trial to acquit said defendant, regardless of valid and reliable prosecutorial evidence supporting conviction.”

I might have chosen “mitchmander” in parallel construction with “gerrymander,” since Mitch is slimy and crawls on his stomach like a salamander. I decided, though, that I did not want to insult salamanders by associating them with McConnell. So, let’s leave them with Gerry instead.

I could have aimed at increasing the alliteration by coining “moscowmitchmatching” or “moscowmitchmandering” to expand on Joe Scarborough’s moniker of “Moscow Mitch,” but I would rather follow the adage of K.I.S.S. — keep it simple, stupid.

Aiding and abetting the mitchmatching was the once but no longer reputable Harvard Law professor, Alan Dershowitz, who throughout the faux trial took the Constitution and twisted it like a pretzel until it cracked and has become ready to be salted and eaten!

Basically, what Dershowitz stated clearly by implication is that,  ‘we know you stole the gun to shoot that person. We know you approached, shot, and killed the person. We arrested you. But we decided not to convict you because it does not raise to the level of criminal behavior, and we, therefore, decided to let you go. So please don’t kill anyone else. But if you do, we won’t care,’ and on behalf of Trump, he has attempted to dump his tax records, “fact witnesses” at the Impeachment trial, and John Bolton’s book accusing him of potentially impeachable offenses into the same shuttered and inaccessible safe where he forever locked away his conscience, sense of empathy, and ability to tell the truth.

We must end this national (and international) nightmare by voting these Republican co-conspirators and enablers out of office and replace them with people who actually have integrity.

“Integrity,” from the Latin integer, means “whole” or “complete.” The term has come to relate to a person’s inner sense of wholeness or completeness regarding consistency and high standards of character related to beliefs, values, honesty, truth, morality, and ethics. Institutions are also assessed in terms of their overarching integrity based on similar qualities as on the individual personal level.

In the U.S. House of Representatives impeachment hearings and subsequent Senate trial, the concept and demonstration of this precious notion of integrity must function as our lens of perception in assessing the process.

Republicans have failed to safeguard our nation from executive abuses by losing entire pieces of ourselves. We must never allow mitchmatching to corrupt our legal system ever again!

Marsha P. Johnson is getting a state park in Brooklyn named after her