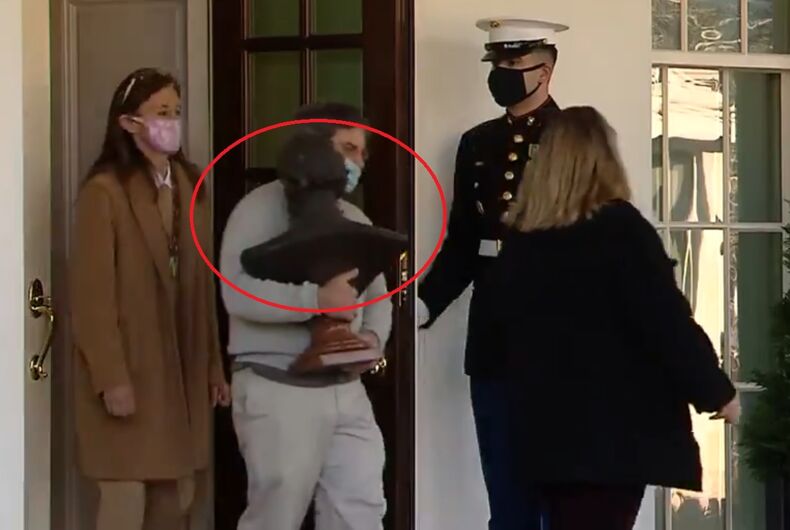 A staffer appears to be leaving the White House with a bust of Abraham LincolnPhoto: Screenshot/CSPAN

Updated at the end of the story.

Trump administration staffers are being spotted and accused of stealing historical artifacts from the White House as they prepare to leave.

With Joe Biden’s inauguration less than a week away, observers are posting pictures of people who have spent the last four years in the White House leaving with pictures, statues, and other objects as they leave.

Related: The first “Mike Pence for President” ad is here & it’s a doozy

CSPAN’s Jeremy Art posted a video of what appears to be a staffer removing a bronze bust of Abraham Lincoln from the White House.

SPOTTED: Bust of President Abraham Lincoln leaving the West Wing about an hour ago. pic.twitter.com/QOulIk1dQE

The bust, according to the Washington Examiner, was created by Gutzon Borglum and usually sits in the East Garden Room, where visitors to the White House can see it.

While the new administration will likely redecorate the White House, works of art from the White House Collection belong to the federal government and usually remain on-site, even as the president changes.

“These photos belong to the American people, and go to the National Archives.”

This is illegal. These photos belong to the American people, and go to the National Archives.

(I know this as when I left the WH in 2012, I wanted to take with me the photo I had of @BarackObama and the 2008 World Champion @Phillies) https://t.co/ab6LFCtGXQ

Baer noted that it may be possible that Navarro paid to have the photograph printed and framed… but that wouldn’t explain why he was seen leaving the White House with it.

Yes. But by looking at this print, it looks exactly like the pictures that are all over the West Wing and EEOB.

CNN White House correspondent Jim Acosta tweeted a picture of what may have been another staffer taking a stuffed pheasant from the White House.

More stuff being moved out of West Wing. This appears to be a stuffed bird. pic.twitter.com/EkUChUDXLC

The White House is not commenting on the alleged looting.

UPDATE: Stewart McLaurin, the President of the White House Historical Collection has responded to “all concerned about media photos of items leaving the White House.”

“The White House Chief Usher and the Curator have responsibility for managing and accounting for the White House Collection in every presidency,” he wrote. “They are an exemplary team of career professionals and should have our confidence in carrying out their responsibilities.”

“Be reminded that staff have items of their own that they brought to the White House and can take those items home if they wish. Some items are loaned to staff and offices from other collections and will be returned to those collections.”

@BeschlossDC, @Acosta, and others…. I have reconfirmed the following today with the White House Chief Usher. pic.twitter.com/yPN1bYoV7K