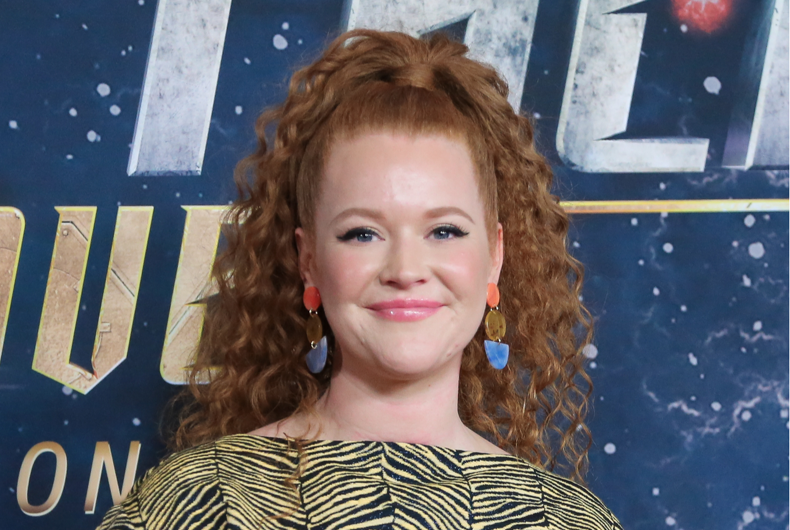 35-year old actress Mary Wiseman, currently starring in Star Trek: Discovery, has come out — and confirmed they came out — in a series of interviews.

Wiseman has starred as Ensign Sylvia Tilly on the CBS All Access show since 2017. Tilly’s been previously described by co-showrunner Aaron Harberts as “sort of the soul of our show.”

Related: William Shatner spent the weekend ranting about the word “cisgender” on Twitter

In the first interview, conducted by Dawn Ennis via Zoom and printed for Forbes.com, Wiseman responded to Ennis’s joke that “it’s nice that [the producers] let the straight people also be part of Star Trek,” alluding to the LGBTQ representation on the show, including four previously out stars in Anthony Rapp, Wilson Cruz, Blu Del Barrio and Ian Alexander. Additionally, show co-creator Bryan Fuller is also out.

“I’m so glad [to be part of it],” Wiseman said. “It’s so important in that… this is the world. This is what the world looks likes, this is the world coming into focus, and this is a real representation of who should be at the table.”

But prior to that answer, the audio for part of her response didn’t convert over, so viewers only saw what it appeared Wiseman was saying:

So earlier this week, Ennis followed up with Wiseman to confirm, and she relayed the actress’ response in StarTrek.com.

The actress does not identify as straight, but since she’s in a heterosexual relationship — with Noah Averbach-Katz, her co-star that she married in 2019 after years of dating — she feared being outward about her sexuality as a “straight-presenting” woman would subject her to scrutiny and criticism.

“I just didn’t want to say I’m straight when I’m not! Before Noah, I dated and loved people of all genders,” she told Ennis, “I never liked it when straight-presenting women dominated conversations about bisexuality/pansexuality when I was with women, so I try not to do it now.”

She finally decided, though, that “I also don’t want it to feel like I’m hiding anything because I’m queer and proud!”

Wiseman had already spoke up in the Forbes.com interview about online bullying she’s taken notice of from fans over her size and appearance in the show.

“I see those things and they hurt me because I’m a person. I’m a human being, you know? And to have somebody step in and defend you is really meaningful,” she told Ennis.

Wiseman has also appeared in the award-winning film Marriage Story, regularly in the shows Baskets and Longmire, and has guest starred in Difficult People and Room 104.

Star Trek: Discovery just completed its third season on the straight-to-streaming service for CBS and other Viacom properties.