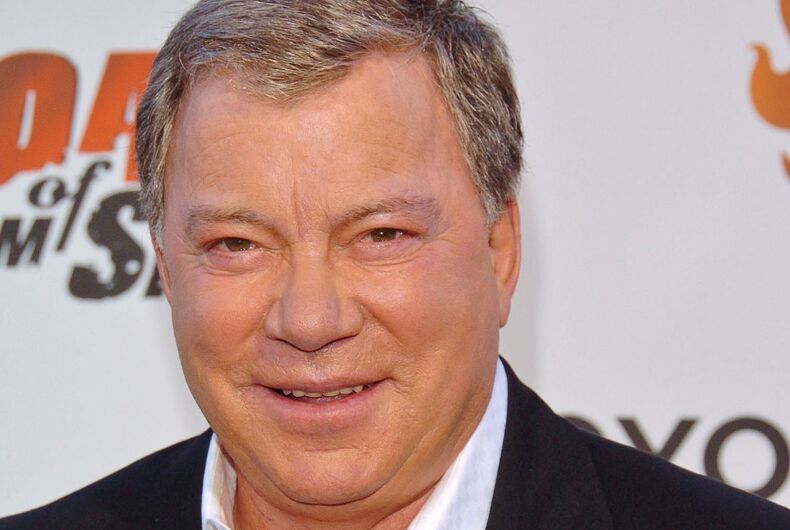 William Shatner has been complaining about the word “cisgender” on social media for a week now.

The 89-year-old actor who played Captain James Kirk on the original Star Trek series and films first made his objection to the term known in a tweet on Monday, August 3, when a fan sarcastically tweeted that Shatner is an “old white man so you MUST be a hateful bigot.”

“You forgot CIS as in old white CIS man… need to stay current,” Shatner said, even though no one had actually called him an “old white cis man” on Twitter at that point as an insult.

In a tweet from later that day, Shatner said that the only reason for the word “cisgender” is to “harass or debase” people like him.

Some need labels and categories to separate people in order to harass or debase them. The only time CIS is used when referring to me is in that way. 🤷🏼‍♂️ Do we need these labels in order to communicate? No. So those that use them when describing others are doing it for neg reasons. https://t.co/rsPGkvHE7N

People explained to Shatner last week that the term is neutral. Cis- is the Latin prefix that is the literal opposite of the prefix trans-. Dawn Ennis at Forbes pointed out that the first known use of the term “cisgender” was by a cisgender biologist, which is appropriate considering that the prefix cis- remains common in organic chemistry and molecular biology.

Shatner responded on Saturday with screenshots of people discussing cis, white, straight, and male privilege and said that it was proof that the term is “a slur & term of harassment.” While the words “white” and “male” were used similarly in the tweets he showed, but he only responded to the use of the word “cisgender” that way.

It’s used as a slur & term of harassment 👇🏻. If you want to use that term in your own mind to differentiate people for whatever reason; that’s your right. You using it to label me; I’m going to object to it because I cannot fathom any positive reason to use it on strangers online https://t.co/eNFLDOTa5S pic.twitter.com/2Unu2Ck4wi

He continued to tweet about the word “cisgender” throughout the weekend, even writing at one point that people “are merely assuming my sexual identity.” He did not later come out as gay, bi, non-binary, or transgender, so it’s hard to tell what he meant.

It was well balanced article. Your use of that word, as you know, implies a form of harassment to me (you also do not know anything about me & are merely assuming my sexual identity. ) Why is something like that needed? You could just say you were trans but you needed to use it🙄 https://t.co/x0Qk8JS7sW

Shatner also got support from transphobic people and claimed that he did not want their help in arguing why cisgender people should have a right to take away a useful word for discussing transgender issues.

I’m not asking for help or allies. Nothing I’m saying is hurtful; I’m asking people not to label me as I consider it harassment. Several people think I’m taking away their rights 🙄 & are arguing. It’s a bit bizarre but I’m not going anywhere nor am I changing my mind.🤷🏼‍♂️ https://t.co/QTu53V6lmM

He also argued that it’s that he doesn’t like being called “white” in the same way other, implying that white people face racism based on “the color of their skin.”

Except when using the term “white” you do it to harass and debase me. That’s the difference. And one certainly should get mad & object to people attacking and debasing them on the color of their skin. Right?🤷🏼‍♂️ https://t.co/tzhNUuY1JJ

And he claimed that most transgender people would “condemn” the “trolls” who use the word “cisgender.” He did not cite a source for that claim or explain how these trans people refer to people who are cisgender.

Let’s be clear, these trolls who need to label, debase and harass are not representative of the entire trans community. I’m sure there is a majority of members of the trans community that would condemn their actions. https://t.co/nqCCg7ea0B