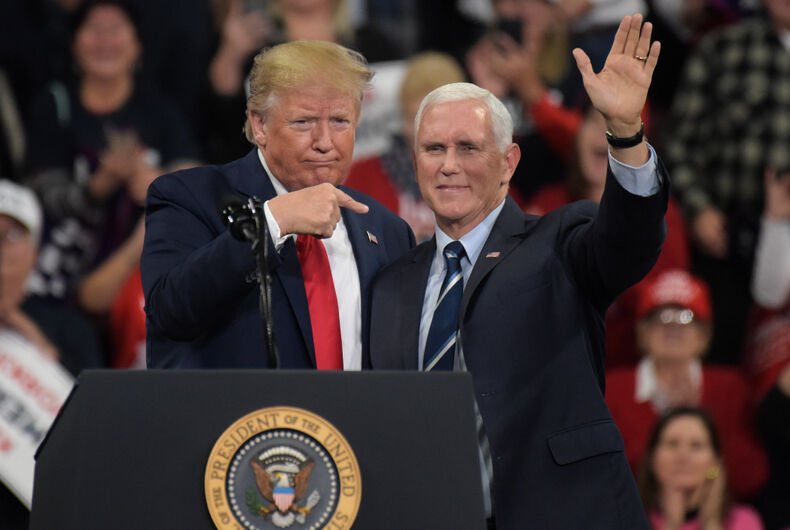 In January, Vice President Mike Pence will have the uncomfortable duty of presiding over the session of Congress that will formally certify President-elect Joe Biden’s victory.

And then, before Trump supporters can muster their forces against him, he’ll “skip town,” according to sources in the White House.

Pence is reportedly planning an overseas trip to the Middle East and would leave immediately following the certification. It might be his way of dodging the ire of MAGA followers convinced that the election was stolen from Donald Trump.

Trump has repeatedly falsely claimed that the election was stolen and launched dozens of frivolous lawsuits full of blatant lies. All were rejected by courts in multiple states and the Supreme Court. Legal professionals nationwide have called for the disbarment of Trump’s lawyers for violating ethics rules by filing obviously fake lawsuits.

While Pence staffers officially deny that the Vice President plans to flee after Biden is certified the winner, documents show that he will travel to Bahrain, Israel, and Poland with other potential stops. The trip is expected to last at least a week.

“I suspect the timing is anything but coincidental,” one staffer said off the record.

While Trump has refrained from attacking his vice president throughout his administration, a rare feat in itself, that courtesy may not extend much longer. The notoriously temperamental Trump has attacked any Republicans who have acknowledged Biden’s win, including Senate Majority Leader Mitch McConnell, an ardent ally.

So far, Pence has tried to stay above the controversy and only give the bare minimum support to Trump’s fantastical claims. He’s allowed his signature and name to be used on fundraising emails and has joined calls with donors but has refrained from making any public commentary other than saying the president had a right to challenge the results in court.

While the nation has voted in favor of Joe Biden, and the Electoral College has cast their votes in favor of the president-elect, Trump has yet to concede the race. The certification of the election results will be the final nail in the Trump administration’s coffin.