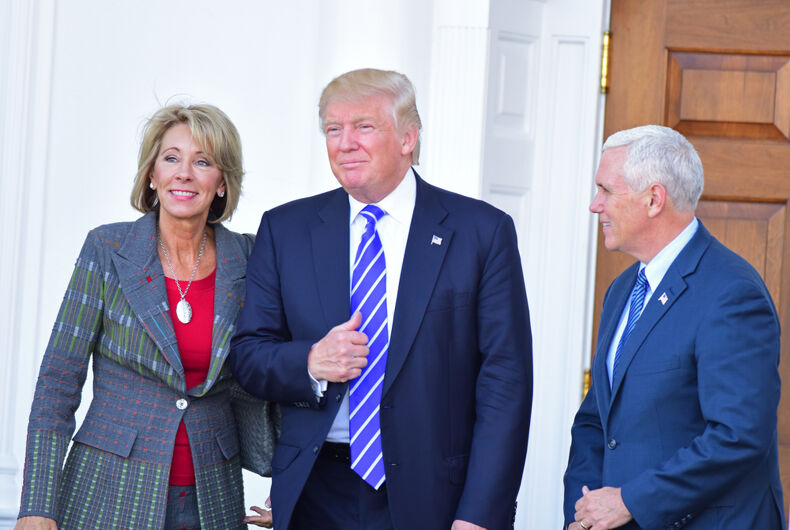 Secretary of Education and billionaire Betsy DeVos is resigning her position in the Trump administration following the MAGA riots at the Capitol earlier this week.

In a letter to Trump, she blamed the soon-to-be former president for “the mess caused by violent protestors overrunning the U.S. Capitol in an attempt to undermine the people’s business,” violence that left five people dead, including one police officer.

“There is no mistaking the impact your rhetoric had on the situation, and it is the inflection point for me,” she wrote in the letter.

“Impressionable children are watching all of this, and they are learning from us,” she continued. “I believe we each have a moral obligation to exercise good judgement and model the behavior we hope they would emulate.”

DeVos was a longtime school privatization activist before Trump put her in charge of the Department of Education. In 2017, after she was confirmed, she promptly rolled back protections for transgender students in schools that were established during the Obama administration.

Since then, the Department of Education has allegedly broken its own internal rules in order to help with a hate group’s lawsuit against the state of Connecticut that accused the state of discriminating against cisgender girls by allowing transgender high school students to compete in sports as their gender.

Later, the Department of Education under DeVos threatened integration funding to schools it perceived as being too trans-friendly.

Now, mere days before Joe Biden’s inauguration, DeVos has decided that Trump has gone too far and is jumping ship.

She’s not the only member of the Cabinet to resign this week. Secretary of Transportation Elaine Chao – whose husband is Senate Majority Leader Mitch McConnell (R-KY) – resigned saying that she was “deeply troubled” by the “entirely avoidable” MAGA riots at the Capitol.

Biden has said that he will nominate out former Mayor Pete Buttigieg to replace her.