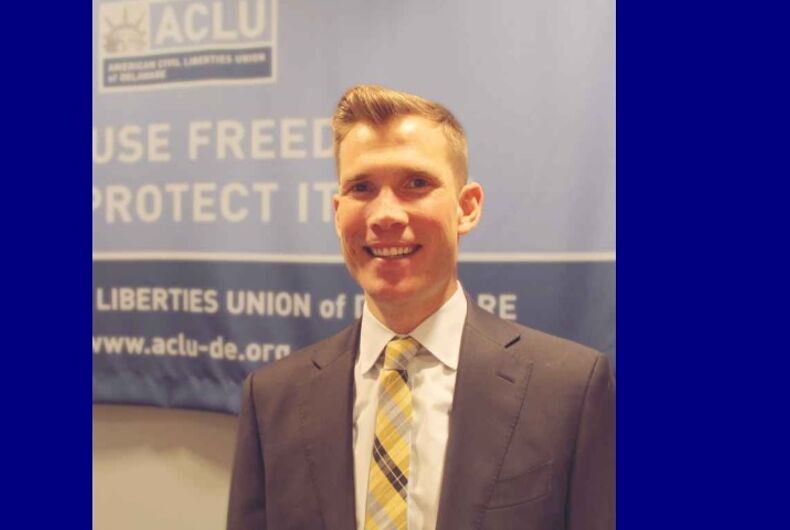 Although he hasn’t conceded yet, Donald Trump’s loss in the presidential election guarantees at least a few things. He won’t be in office after January 20th, and neither will his entire Cabinet.

And in a list of the most harmful members, Secretary of Education Betsy DeVos would be chief among them.

While Trump has had a revolving door in Cabinet positions over the last four years, there have been a few mainstays like DeVos and Ben Carson at the Department of Housing and Urban Development. While it would be stiff competition with Carson, no one has been more proudly anti-LGBTQ in both policy and decision-making than DeVos.

Dwayne Bensing, a former employee of the Department of Education under DeVos, knows better than anyone.

“They’re supposed to help protect the rights of students, teachers, any people who want an opportunity for education. Instead, what they’re really doing is undermining the lives of hundreds of thousands of us across the United States,” Bensing told LGBTQ Nation in an interview.

Bensing, who is out, is known as the whistleblower that lost his job in the Department’s Office for Civil Rights last year for releasing documents that exposed their pointed anti-trans policy decisions – and the rush to make them happen.

“They care more about harming students than they do about protecting their career civil servants,” he said at the time.

Bensing spoke with LGBTQ Nation a few days before the election. He was traveling to campaign for Joe Biden and Kamala Harris ticket in North Carolina. While it appears Trump won the state, the race has not been called yet.

He described the potential that DeVos could remain in place for another four years “a terrifying thought” and paused for a moment.

“I think that this administration had a slow start, they weren’t the most… competent administration in the first few years, but they have hit their stride. I am terrified about an emboldened administration’s second term.”

They may have started slow, but DeVos and her underlings have certainly found their footing – if you can call threatening to pull funding from schools that allow trans athletes to compete, or attacking colleges that don’t educate positively on Trump-supporting regimes across the world, any kind of solid basis for leadership.

Bensing witnessed from the start how DeVos knowingly disregarded LGBTQ students – when she wasn’t intentionally trying to harm them. He, along with others, tried to persuade her from the start to keep federal guidelines in place from the Obama administration that banned discrimination against transgender students in public schools.

She didn’t, but the Secretary wrote a letter to him, thanking him for standing up for “vulnerable children.”

“I thought that this administration within the Department of Education, what it was willing to do was very concerning,” he said.

Bensing watched as the Department, including his own inter-department office, got chummy with hate groups and served as partisan pawns in Trump’s anti-LGBTQ agenda.

The Department of Education actively helped groups that discriminate against LGBTQ people to still receive funding from the government. They helped promote schools that allowed (Christian) prayers during instruction time after Trump began to champion it so he could keep the support of the religious right. DeVos even sent out guidelines on how to legally push religion in schools, secular or not, across the country.

Even when testifying before Congress, DeVos couldn’t pretend to be supportive of LGBTQ people. All the while, Bensing and others continued to push the higher-ups, some of who are supposed to be non-partisan, to stand up and prevent these rules.

Eventually, it became clear many of them, namely, Ken Marcus, who ran the Office for Civil Rights, would actively support the moves. Part of the emails Bensing leaked showed that Marcus, along with Lisa Chang, the Office’s enforcement director, were actively rushing through a Title IX complaint filed by an anti-LGBTQ hate group that challenged trans athlete’s rights to compete in sports – before lawyers had even come up with a legal strategy.

He is concerned about the damage that DeVos and others inside the Department can still do.

“I really worry about how they’ll proceed now that they have figured out, better, the ways that our government operates and the tools that are available that could really impact day-to-day lives for everyday Americans,” he said.

“When Ken Marcus announced his resignation from the Office for Civil Rights, I was encouraged that the office perhaps would not move forward in any drastic way on any of the most concerning matters and issues before [the election],” Bensing said, “Instead, what I found is that Kimberly Richey, who is now the acting Assistant Secretary of Civil Rights, took an upside-down view of what anti-discrimination protections mean for LGBTQ students in this country.”

“They adopted a policy position that is contrary to every appellate court decision in recent times, and have really used the office to limit hundreds of students, and it matters. That is not a healthy environment for a civil rights office, and it is not good for our students or children.”

So while Biden’s administration has already announced plans to reverse most of DeVos’s actions, Bensing is thinking of the LGBTQ students who have already been affected. Still, he is optimistic.

Relief is on the way, he said.

“We will not go back. We are going to be moving forward,” Bensing told LGBTQ Nation. “There are better days that lie ahead.”

“I really think that being true to you is so important, so my message to young people in schools is to keep hope, find your support network, and stay strong. We will persevere.”