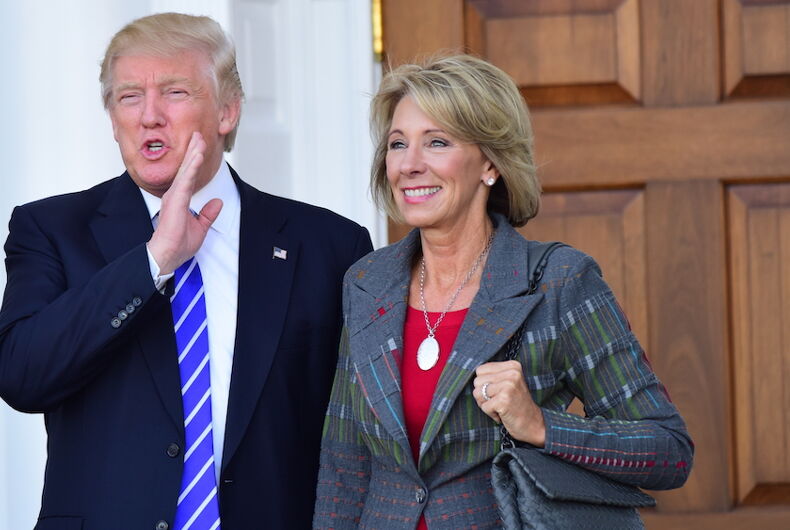 Secretary of Education Betsy DeVos is reportedly threatening to pull $18 million in diversity funding from Connecticut schools that refuse to withdraw from the state’s athletic conference that allows transgender students athletes to compete.

The Office for Civil Rights at the Department of Education is threatening to withhold the diversity money from three districts in the state that is intended to help schools desegregate. The schools are members of the Connecticut Interscholastic Athletic Conference (CIAC), the organization that runs school sports in the state.

The CIAC is currently being sued by three cisgender students with help from the SPLC designated hate group Alliance Defending Freedom because transgender girls are allowed to compete with their gender in that state. The Department of Education, under Trump, has been supportive of the hate group’s lawsuit.

The Trump administration wants school districts in New Haven, Hartford and southeast Connecticut to cut ties with CIAC by October 1 and they’re using the desegregation funds to put pressure on them.

The grants help fund Black and Hispanic students who want to attend schools outside of their neighborhoods.

The New York Times notes that Trump and DeVos have championed such school choice programs in the past, but apparently their support for Black and Hispanic students isn’t as strong as their opposition to transgender teenagers.

“It’s effectively extortion,” said New Haven Mayor Justin Elicker (D). “The federal government is trying to force us to take a side against transgender individuals.”

He said that losing the funds this year could threaten the state’s magnet school program as it’ll force deep budget cuts. One school district superintendent said that he would have to lay off four middle school teachers if the Trump administration follows through with its threat not to release the funds.

But a spokesperson for the Department of Education said that it’s not extortion because “Congress requires the Department to withhold funds from schools that aren’t in compliance with the law,” referring to the Trump administration’s insistence that allowing transgender student athletes to compete violates Title IX’s ban on discrimination on the basis of sex in schools.

Since 16 states have similar policies to Connecticut, the implications for school desegregation are big.

“The intent of the magnet grant is to carry out the intent of Brown v. Board of Education,” New Haven Public Schools coordinator Michele Bonanno told the New York Times. “You can imagine how heartbroken we’ve been. To pit a minority community against the LGBT community is disgraceful.”