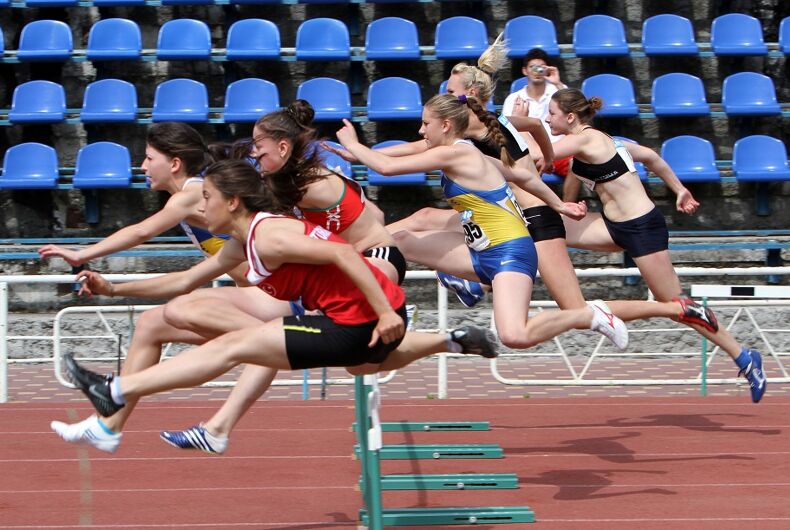 Teen athletes competing at a 2012 competition in Yalta, Ukraine.Photo: Shutterstock

The families of three high school runners in Connecticut have filed a lawsuit in attempt to prevent transgender athletes from competing in girls’ high school sports.

Represented by the the SPLC designated hate group Alliance Defending Freedom, the families of students Selina Soule, Chelsea Mitchell, and Alanna Smith argue that transgender girls have an unfair advantage in sports, which prevents their daughters from advancing to competitions where they could be considered by college scouts.

“Mentally and physically, we know the outcome before the race even starts,” Smith, a sophomore, told the Associated Press. “All girls deserve the chance to compete on a level playing field.”

The complaint refers to transgender girls who want to compete in sports as “boys” and “biological males,” because the Alliance Defending Freedom misgenders transgender people as a matter of policy. The complaint argues that Title IX, which bans sex discrimination in schools, was only referring to discrimination based on sex assigned at birth.

The complaint was drafted due to the participation of two Black transgender athletes, Andraya Yearwood of Cromwell High School and Terry Miller of Bloomfield High School, who won several competitions.

On Wednesday after the lawsuit was announced, Chase Strangio, deputy director for Trans Justice with the ACLU LGBT & HIV Project, released a statement to reaffirm the ACLU’s commitment to them: “Today’s complaint filed in Connecticut targeting the inclusion of transgender girls in girls’ athletics and specifically naming Terry Miller and Andraya Yearwood is a dangerous distortion of both law and science in the service of excluding trans youth from public life.”

“The purpose of high school athletics is to support inclusion, build social connection and teamwork, and help all students thrive and grow. Efforts to undermine Title IX by claiming it doesn’t apply to a subset of girls will ultimately hurt all students and compromise the work of ending the long legacy of sex discrimination in sports.”

The demand that athletics be organized by chromosomes instead of gender identity, Strangio said, “is an assault on the basic dignity and humanity of transgender people and a threat to the privacy and equality of all students.”

Connecticut has one of the most inclusive policies in the country for transgender athlete participation in sports.

Transathlete.com shows it as one of seventeen states that allows athletes to compete with the gender with which they identify without requiring them to have undergone any surgery or hormone treatments.

“Connecticut’s policy violates that law and reverses nearly 50 years of advances for women,” she told the Associated Press, claiming it also forces girls “to be spectators in their own sports.”

The antagonism has been brewing for quite some time. In 2018, Soule, now a senior, told the Hartford Courant, “I think it’s unfair to the girls who work really hard to do well and qualify for Opens and New Englands. These girls, they’re just coming in and beating everyone. I have no problem with them wanting to be a girl.”

In June, the families filed a complaint with the U.S. Department of Education’s Office for Civil Rights, alleging that the cisgender runners were the victims of discrimination for being forced to compete against transgender women.

Yearwood maintains that there are many reasons people gain physical advantages over others.

“One high jumper could be taller and have longer legs than another, but the other could have perfect form, and then do better,” she said in February. “One sprinter could have parents who spend so much money on personal training for their child, which in turn, would cause that child to run faster.”

When the EEOC complaint was filed in June, Miller told the Hartford Courant, “I have faced discrimination in every aspect of my life and I no longer want to remain silent. I am a girl and I am a runner. I participate in athletics just like my peers to excel, find community and meaning in my life. It is both unfair and painful that my victories have to be attacked and my hard work ignored.”

“This is about someone’s right to compete,” executive director Glenn Lungarini told the AP. “I don’t think this is that different from other classes of people, who, in the not too distant past, were not allowed to compete. I think it’s going to take education and understanding to get to that point on this issue.”

The lawsuit was filed the day before Connecticut indoor track championships began. It asked that Yearwood and Miller not be allowed to compete until the results of the suit are determined.

As of Wednesday, a hearing date had not been scheduled to address that request.

Yearwood has said despite the turmoil, she does her best to focus on the positive encouragement she has gotten from family and friends.

In a statement released by the ACLU, she said: