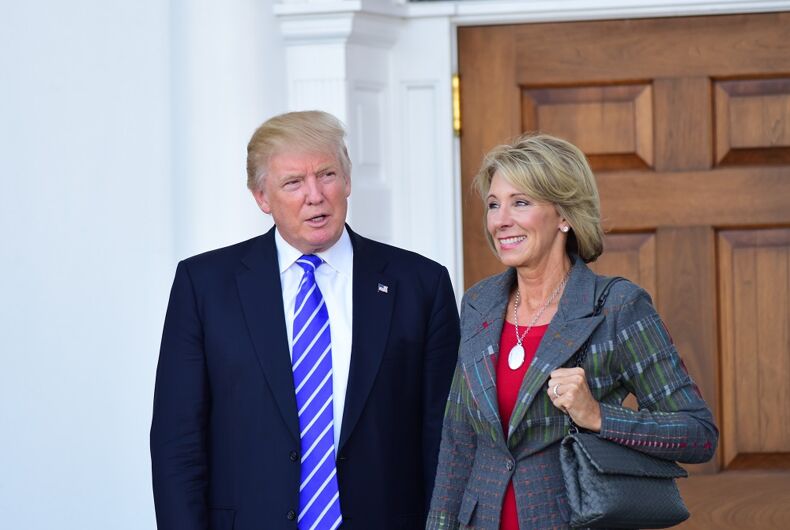 An anti-LGBTQ hate group has filed a federal complaint on behalf of three cisgender girls to stop transgender student athletes from competing, and the Department of Education has agreed to investigate.

The Alliance Defending Freedom (ADF) filed a Title IX complaint saying that allowing transgender girls to compete as girls in the state of Connecticut puts cisgender girls at a disadvantage when it comes to team sports and scholarships. And Betsy DeVos’s Department of Education has jumped on board the complaint, rushing a response in support.

According to leaked emails, Lisa Chang, an enforcement director within the Office for Civil Rights, tried to get the Department to respond quickly to the complaint before even looking at state legal issues.

The complaint, which refers to transgender girls as “boys,” says that the Connecticut Interscholasatic Athletic Conference allows transgender students to compete with their gender identity in order to comply with state nondiscrimination law.

It’s one of 17 states that does not require hormone replacement therapy as a condition for high school athletics.

The complaint specifically refers to Terry Miller and Andraya Yearwood, two Black transgender teens in Connecticut who made national headlines earlier this year when they won several track and field events at the state tournament. The complaint refers to them as “biological males.”

Both girls are undergoing hormone replacement therapy, according to ABC News.

“The presence of boys competing in CIAC girls’ track and field events in Connecticut has now deprived many girls of opportunities to achieve public recognition, a sense of reward for hard work, opportunities to participate in higher level competition, and the visibility necessary to attract the attention of college recruiters and resulting scholarships,” the ADF’s complaint says.

ADF argues that this violates Title IX, which bans sex discrimination in education. ADF argues that Title IX only refers to sex assigned at birth, not gender identity, a controversial claim that, if successful, would roll back protections for transgender people in many areas under the law.

“Policies like those in Connecticut are in place in 17 states and thousands of schools across the country and have ensured fair opportunity for every student athlete,” Gillian Branstetter of the National Center for Transgender Equality told the Washington Blade.

“This is yet another desperate attempt by the ADF to strip transgender students of the rights every student deserves and policies that provide them the same opportunities as every other student.”

One of the leaked emails from a Department lawyer said that they needed time to work on a legal theory. Title IX has been used by transgender advocates to make schools safer for transgender students, but the ADF’s complaint would turn it around and use it to exclude some girls from athletics.

But, earlier this week, Chang insisted the Department “must issue today” a letter of notification.