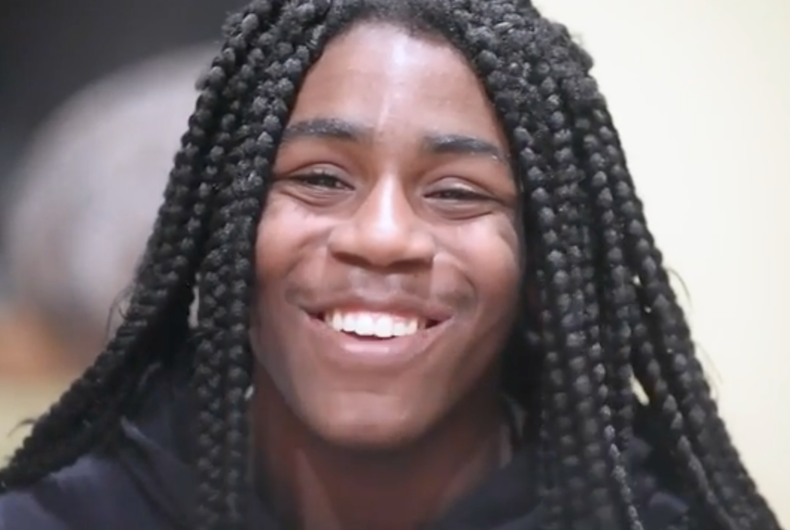 Last week, a transgender Connecticut student ran in her first track meet against other girls. It was also her first high school competition. But despite that newness and the attending nerves, 15-year-old Andraya Yearwood took home two first place ribbons and the support of her new team.

“I’m so happy and so excited to be doing this and so thankful for all of my support,” Andraya told the Hartford Courant.

The Cromwell High School freshman came out to her parents in middle school, where she ran for the boys team, and plans to start taking hormone blockers soon. In her first race of the high school track season, Yearwood won the girls 100- and 200-meter dashes with times of 11.99 seconds and 26.34, respectively.

“I do hope I inspire people, but not only with track,” Andraya said. “I hope it inspires people to not hold yourself back just because you’re scared of it or it is your first time doing it, or because of other people’s negativity.”

Other people’s negativity is something Andraya and her family are prepared for. Especially since she is performing so well, so early. The Hartford Courant notes that her 100-meter time is just .01 seconds behind the winning time for that race at last year’s State Open. Andraya’s impressive times were under less-than-ideal conditions: it was cold and she didn’t have starting blocks.

“I know they’ll say it is unfair and not right, but my counter to that is: Why not?” her mother told the newspaper. “She is competing and practicing and giving her all and performing and excelling based on her skills. Let that be enough. Let her do that, and be proud of that.”

The school district seems to be doing just that. Andraya didn’t run into any problems joining the girls track team and she is enjoying the support of her coach and teammates.

“I definitely think she’ll be an inspiration for people,” Ehsub said. “I think Andraya is very brave and has lots of guts to go out in the world where it is not always supportive and positive.”

Andraya is the first out trans student athlete at her high school, but officials from the Connecticut Interscholastic Athletic Conference don’t believe she’s the first transgender athlete to participate in an CIAC sanctioned sport. Of course, that’s not the sort of thing the organizations keeps records on.

The CIAC handbook makes it clear that denying transgender students the right to participate in school sports on the team that aligns with their gender is unjust and a violation of state and federal laws. The conference takes schools at their word on the gender of student athletes.

Elsewhere in the country, school districts, athletic associations, and even state lawmakers are grappling with whether and how to include transgender students on sex-segregated sports teams. In one case that has been drawing national attention, a transgender high school wrestler who asked to compete with other boys but was forced to wrestle girls won the Texas state competition, much to the chagrin of other athletes and parents. He recently won the right to compete with boys outside of the school season.

Nearly half of American adults infected with genital HPV