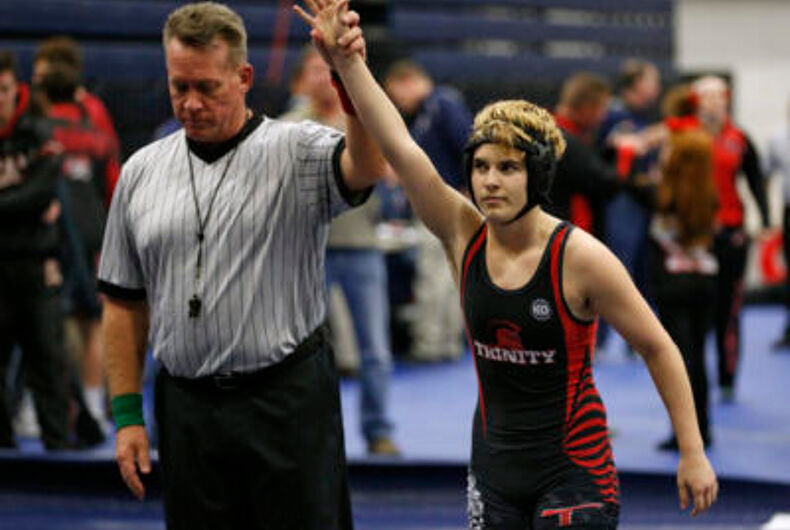 In this Feb. 18, 2017 photo, Euless Trinity's Mack Beggs is announced as the winner of a semifinal match after Beggs pinned Grand Prairie's Kailyn Clay during the finals of the UIL Region 2-6A wrestling tournament at Allen High School in Allen, Texas. Beggs, who is transgender, is transitioning from female to male, won the girls regional championship after a female opponent forfeited the match. Photo: Nathan Hunsinger/The Dallas Morning News via AP

A transgender teen who recently made headlines for his controversial victory against female competitors has won approval to compete with other boys. But there’s a catch — he can only do so in the off-season.

Under a new policy adopted by USA Wrestling, athletes transitioning from female to make are only eligible to compete in the male category. This change, while in line with the International Olympic Committee, runs counter to a University Interscholastic League ruled passed in 2016 that requires public school students to compete based on their sex assigned at birth, WFAA News 8 reports.

The policy change comes just one month after 17-year-old Mack Beggs, a transgender boy who is taking testosterone as prescribed by his doctor, won a girls’ state wrestling title.

After he won, parents of other wrestlers objective, arguing Beggs had an unfair advantage and could have injured the girls who were competing in the 110-pound category. One parent filed a lawsuit asking the UIL to prevent Beggs from competing in the girls division during the 2017-2018 school year.

“Mack is challenging what people thought was a good policy,” Mosier said. “This very well may spark change from people just by seeing how the policy was not well thought out and this is the outcome of following the rules exactly as they are.”

Even the attorney who sought an injunction to prevent Beggs from competing said he now supports the teen in competing against the boys — just not against the girls. Unfortunately, even if there is support for a policy change, it’s too late to impact Beggs’ senior season.