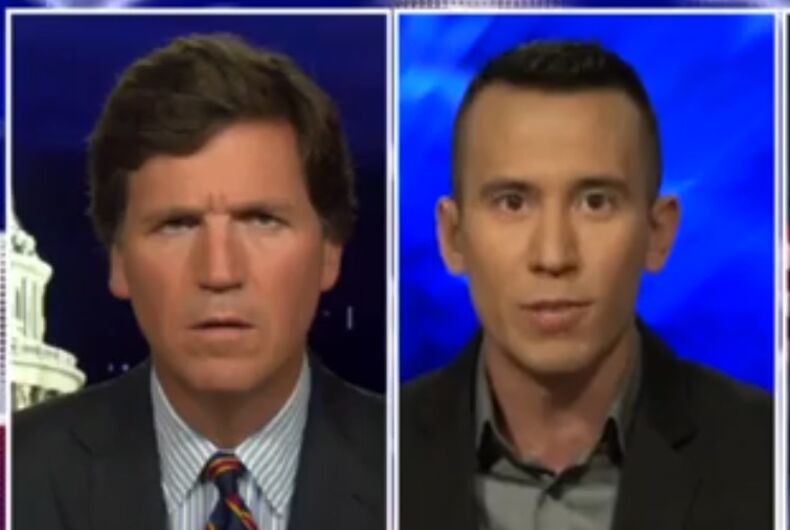 Fox News host Tucker Carlson was very surprised to find out that there are gay Republican staffers in D.C.

“Capitol Hill, meaning the staff on Capitol Hill, not the representatives or the senators, the staff – the staff is very, actually very gay, on both sides,” Scarry said.

“But, the Republican side is actually gayer than the Democratic side. The Republican side, they’re very very discreet about the fact that they’re Republicans,” he said, echoing a common complaint among gay Republicans that the real discrimination they face is from other LGBTQ people so they have to hide their Republican leanings.

Please watch Tucker's face as his guest explains how gay the GOP hill staff is. pic.twitter.com/49HwXb1c0r

The segment was ostensibly about a very problematic poll conducted by the dating app Hornet that supposedly found that 45% of gay and bi men in the U.S. plan to vote for Donald Trump.

The poll did not release data about the demographics of respondents – like their age or race – which were probably skewed because the poll was just something for people using a hook-up app to click on.

“To hold up this poll as evidence that the LGBTQ community is somewhat split on its support for the presidential candidates is like someone saying the users of Farmers Only represent the ideological spectrum of all farmers or that Christian Mingle users represent the ideological spectrum of all Christians,” Prof. Jason Turcotte of Cal Poly Pomona told the Washington Blade.

Moreover, Carlson said in the segment that the poll was about “voters who identified as gay” and Scarry’s explanation of the poll repeatedly described the voters as “gay.” But Hornet is used by bisexual, pansexual, and queer men as well as gay men, and this is more disappointing than usual considering it’s the middle of Bisexual Awareness Week.

Scarry is the author of the book Privileged Victims: How America’s Culture Fascists Hijacked the Country and Elevated Its Worst People, where he claims “the tyranny driving identity politics and its suffocating obsession with race and gender” is harming America, even though the current president is a straight, cis, white man who claims to be Christian and had no prior experience in government.

“God have mercy on any individual deemed to benefit from ‘privilege,'” the book’s description proclaims.