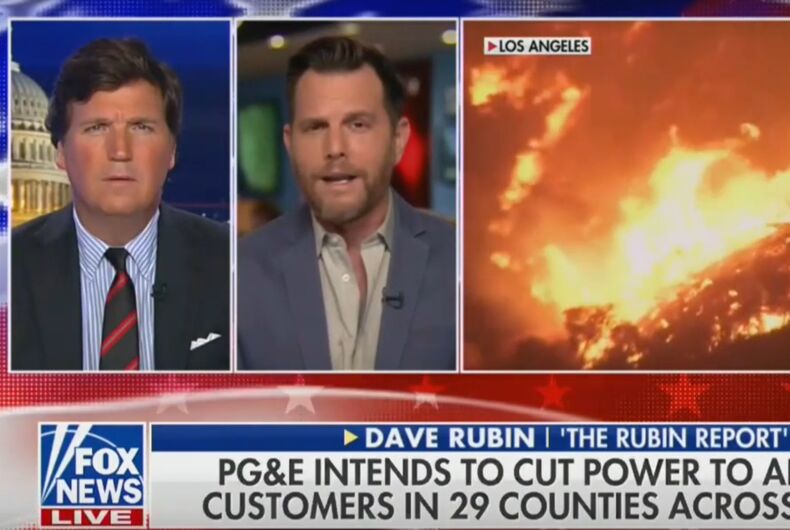 Fox News’s Tucker Carlson blamed the California wildfires on the utility company PG&E… for being too focused on hiring a diverse workforce – and his gay conservative guest agreed.

Carlson and his guest Dave Rubin of the conservative Rubin Report were discussing the California wildfires, which investigators believe were sparked when a tree fell on power lines owned by PG&E.

Related: Tucker Carlson says white supremacy is a ‘hoax.’ Will this finally be the end of his show?

Instead of asking questions about PG&E’s management of its power lines, Carlson got right to his point: “PG&E strikes me as almost a metaphor for the destruction of the state. Here’s the utility which doesn’t really know anything about its own infrastructure but knows everything about the race of its employees. How did we get there?”

Rubin tried to make the connection between diverse hires and the wildfires about “freedom.”

“It is not how freedom is supposed to operate,” he said. “Imagine if your house was on fire. Would you care what the public utility or what the fire company, what contractor they brought in, what gender or sexuality or any of those things he or she was? It’s just absolutely ridiculous.”

It is ridiculous – neither Rubin nor Carlson had any evidence of a link between diversity in hiring and the wildfires, and neither noted the irony that they were discussing the identities of PG&E’s workers instead of the company’s infrastructure.

If anything, hiring the best people of all races, religions, genders, and sexualities – instead of privileging straight cis white men – would probably help PG&E operate better.

Rubin said that there aren’t enough conservatives in the state to “fight what the progressives are doing to the state” (i.e. hiring minorities), and Carlson responded that California is “not civilized anymore” because PG&E is turning off power to hundreds of thousands of homes to help control the fires… because of all those minority hires.

“Ideology seems to trump rationality” in Los Angeles, Rubin said, and Carlson nodded and whispered “Yes,” because neither of them had enough self-awareness to notice that the only reason they blamed black and gay firefighters and the bogeyman of California liberalism wasn’t because they had any rational proof but just because their hateful ideology requires them to.

On Twitter, Rubin defended his comments by saying that he’s married to another man, which apparently means he can never be homophobic or racist.

Hi @ananavarro, nothing I said was racist or homophobic. Actually not that it matters but I’m married to a man. Here’s an piece in the Wall Street Journal on how wokeness is affecting PS&G in CA: https://t.co/Ow1ieNU0Cc

Have a great day. pic.twitter.com/qkhtbKvgw5

The article he linked from the conservative Wall Street Journal doesn’t have any proof that hiring minorities caused the wildfires, it just presents the same complaints that Carlson and Rubin did.