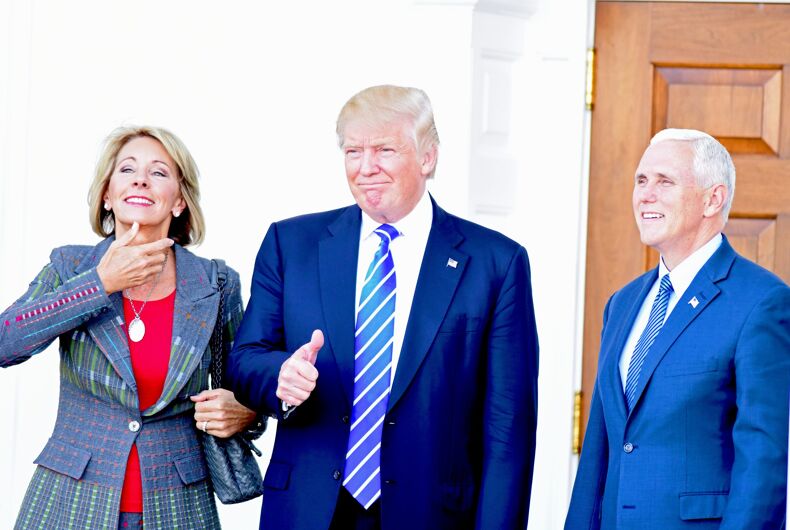 In a move that will certainly appease his base of voters as election season winds up, Donald Trump’s administration has launched a full-court press effort to reward discriminatory organizations, “even if the organization is anti-LGBTQ or has an anti-LGBTQ record.”

The White House has proclaimed that at least 9 federal agencies – “including the Education Department, the Department of Health and Human Services and the Justice Department” – are reducing the requirements that determine which social services, including religious organizations, can receive federal funding. The stringent requirements were set forth by an executive order issued by the Obama administration.

With Education Secretary Betsy DeVos and televangelist Paula White at his side in the Oval Office, Trump told reporters that “his administration was engaged in a ‘cultural war’ to defend school prayer,” and bemoaned that “there is a growing totalitarian impulse” by the ‘far-left’ in the United States. These rollbacks are Trump’s apparent efforts to combat that.

Trump and DeVos specifically seek to protect the rights of public schools and their staff to allow open prayer during the instruction day. DeVos boasts that “the [Education] department’s efforts will level the playing field between religious and nonreligious organizations competing for federal grants, as well as protect First Amendment freedoms on campus and the religious liberty of faith-based institutions.”

"The government must never stand between the people and God." — President @realDonaldTrump pic.twitter.com/PqcJLItiVJ

The Obama executive order was a stringent updating of policies from the George W. Bush administration, installed in 2003. Until now, faith-based providers funded by the United States had to report their organization or entity’s ‘religious character’ to anyone that receives their services – the new regulations will no longer require them to. They were also required to provide alternative providers for recipients who may become ‘uncomfortable’, or want to explore options – but that is no longer necessary, either.

This paves the way for more religious organizations – including those who refuse to serve LGBTQ people – to become ‘compliant’ with federal regulations, giving them the opportunity to receive funds from Trump’s federal government. According to Lambda Legal attorney Camilla B. Taylor, “we are talking about government grants to the tune of millions and millions of dollars.”

“…Increasingly, they are excluding members of the public from receiving services based on who they are,” Taylor told the Washington Post.

DeVos’ Department of Education has already published a “Guidance on Constitutionally Protected Prayer” that lays out all the legal ways for schools, teachers, and students to publicly display religious acts or material. They also included statute and legal persuasions for religious people or entities to use when challenged. In a complete 180, organizations that prevent public religious expression in the Department of Education are now at risk of losing funds.

Reports cite many who believe this is Trump’s veiled effort to appeal to his evangelical base, which has weakened in the wake of Christianity Today‘s criticism of the President, among other conservative outlets of late. Trump has also been expanding his outreach beyond his base – something he did not do previously on the campaign trail – with identity-centered rallies such as a “Latinos for Trump” rally that Vice President Mike Pence attended in Miami this week.

With the Democratic Presidential primary about 6 months away, time is narrowing down for Trump to win back some of his lost supporters – or new ones – prior to the general election.

The Democrats also said that in contrast to Barack Obama’s administration, “The Trump administration…[is] endorsing discrimination against LGBTQ individuals, single mothers, and religious minorities, and putting their safety at risk. It is long past time for Trump and Republicans to stop using ‘religious freedom’ as a license to discriminate.”

This continues a series of Trump’s flirtation with religious leaders and groups that has ramped up as of late. Some of the administration’s religious moves are already in court – The conservative-controlled U.S. Supreme Court is set to hear a case next week that could expand how religious schools access taxpayer funds.