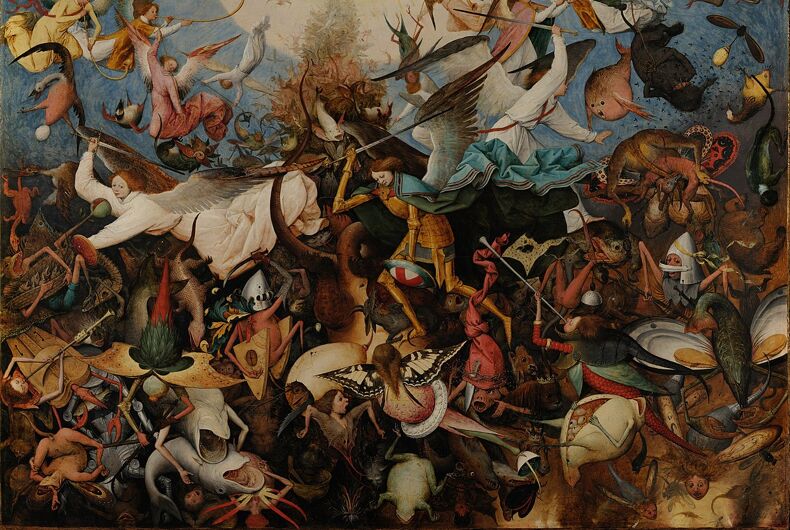 The war in heaven between angels and demonsPhoto: Pieter Bruegel the Elder

Religious right leaders, struggling to maintain power and influence – even in the chaotic White House – have been avowing lately that anyone who opposes Donald Trump is in league with the devil—literally.

In a conversation with fellow evangelical Eric Metaxas, Franklin Graham said that resistance to Trump was “almost demonic,” to which Metaxas replied, “It’s not almost demonic. You know and I know, at the heart, it’s a spiritual battle.”

Graham and Metaxas are hardly alone. Lesser known, but just as dangerous figures like Stephen Strang and Frank Amedia are making the same claim. Strang said on a recent podcast that “this is not a war between left and right, or between Democrats and Republicans, or even between President Trump and his political opponents. It’s spiritual warfare.” Amedia claims that Trump critics are part of a demonic plot to stop the return of Christ.

It’s easy to brush these claims off as the usual hysterical claims from the religious right. But in fact they represent a new—and dangerous—escalation in rhetoric. Saying you’re waging a culture war is one thing; but to say we’re locked in a battle between the forces of heaven and hell sets the stakes at the highest possible level. It makes sense that the same people who have unequivocally worshipped Trump, are doing whatever it takes to keep his affection – even if that means mimicking his incendiary words.

Moreover, it’s not only religious right leaders who are making this argument. No less a figure than Attorney General William Barr is echoing the sentiment. In a speech at the University of Notre Dame in October, Barr went on a tear about “militant secularists” who are destroying society by removing religion from the public square. Even worse was a speech that he subsequently gave to the Federalist Society, the conservative group that has become the clearinghouse for Trump’s judicial nominees.

After claiming that Trump’s opponents — which Barr calls the “Left” —are “waging a scorched earth, no-holds-barred war of ‘Resistance’ against this Administration,” Barr accuses them of essentially worshipping a false god. “In any age, the so-called progressives treat politics as their religion,” Barr argued. “Their holy mission is to use the coercive power of the State to remake man and society in their own image, according to an abstract ideal of perfection.”

Barr then goes on to say that conservatives haven’t responded in kind, which puts them “at a disadvantage when facing progressive holy war.”

When the nation’s lead attorney says that the nation is engaged in a holy war and anyone opposed to the president is on the wrong side, we have entered into frightening territory – and just to be clear, Barr likes to cite LGBTQ progress as an example of secular assault.

Barr, Graham and the other would-be warriors are essentially using their increasing influential beliefs to suggest to conservatives that the political stakes are so high that only a nuclear, violent response will suffice. It was last May that First Things, a conservative Catholic journal, published an essay by New York Post columnist Sohrab Ahmari that argued against establishment conservatives for being too nice. “Civility and decency are secondary values,” Ahmari argued.

Just as they are in war.

The logic of a holy war leads to the inevitable conclusion that any means are acceptable to stop the assault on God’s side. Trump’s violations of practical every political norm is not seen as a sin. It’s a virtue. He’s trying to save the Republic (or at least the Republicans) from the heathen barbarians who are fighting on Lucifer’s side.

This apocalyptic belief is going to be the main theme of the right’s leading into the 2020 election. Instead of trying to adjust to the Modern Age so that they can recruit new members, conservative evangelicals (and their Catholic counterparts, like Barr), prefer to circle the wagons and start shooting.

It’s a losing battle, because their numbers keep shrinking, which will only make them fight harder. After all, it’s a fight to the death.

One fifth grader was thankful for two dads. That triggered this substitute’s homophobic rant.