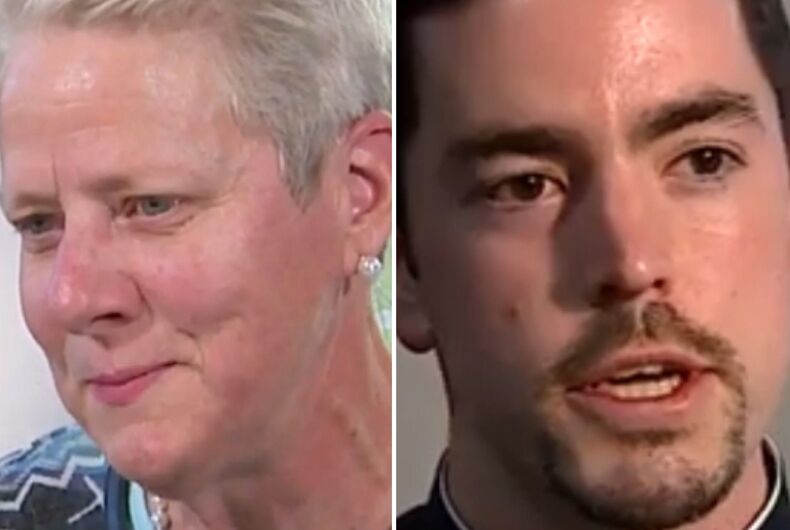 A local Grand Rapids pastor will not offer Holy Communion to a lesbian district judge, despite allowing her to participate as a full Catholic member in all other aspects until that point – including when he accepted $7,000 intended for caring for the church grounds.

To add insult to injury, the local diocese announced they side with the priest in denying her their blessings – mere hours before Thanksgiving.

Related: Franklin Graham says he called Chick-fil-A & he’s sure they haven’t “caved” to the gays

Chief Judge Sara Smolenski has sat on the 63rd District Court of Michigan, which oversees Grand Rapids and Rockford, since 1990. She’s attended the St. Stephen Parish in East Grand Rapids for all of her 62-year old life, like her 9 siblings and parents – a family who has practiced their faith there for close to the entirety of the church’s 96-year history.

In addition to being a local basketball standout who attended the diocese’s local Catholic schools, Smolenski’s been married to her wife Linda for 3 years now. Now, 33 year old head priest Scott Nolan claims that he’s required by the doctrine of the Catholic Church to deny her from receiving Communion “because you’re married to Linda in the state of Michigan,” he reportedly told the Judge.

“I try to be a good and faithful servant to our Lord Jesus Christ. My faith is a huge part of who I am,” Smolenski told NBC affiliate WOOD TV 8. “But it is the church that made that faith, the very church where he is taking a stance and saying, ‘Ho-ho, not you.'”

“Why now and why me?…How come all these other priests everywhere – good and decent, wonderful priests – they know me and they give me Communion?” Smolenski is quoted as saying in The Detroit News.

Nolan called her last week to inform her of his alleged ‘required’ denial, despite doing so during his entire tenure prior to this – including a week before. Now, the local diocese claims that while they “appreciate Judge Smolenski’s service to the community” and “are grateful for her past generosity”, she is in “public contradiction of its beliefs” that they cannot condone.

The Diocese of Grand Rapids suggested in a statement that the Judge does not share “respect…for the teachings and practice of the wider Catholic community,” and lacks the “humility and conversion” needed to “live an authentically Catholic Christian life,” because she spoke to other people about her ordeal.

Father Nolan, however, is free of their criticism – in fact, they praise him for approaching Smolenski “privately,” much to the delight of ultra conservative media outlets such as LifeSite News.

“Subsequent media reports do not change the appropriateness of his action, which the diocese supports,” the Diocese’s director of communications Annalise Laumeyer states.

According to least a dozen unhappy worshipers, there have been issues with Nolan’s leadership well before this, which have cost the decline of attendance in both the church and corresponding school. Months earlier, people criticized Nolan for denying two same-sex parents the Eucharist during their baptism, in front of their entire congregation. “The public shunning – everything about it was offensive,” Smolenski said at the time. He has reportedly denied participation in church activities to people who weren’t already devout Catholics, and now several church members are reportedly too scared to speak up, in fear of reprisal.

“(Nolan) has eliminated teachers who are gay. He has made it clear that gay people are not welcome,” 40 year church member Micki Benz reports. “It’d be better for him and us if there were a change in our pastors.”

After initially avoiding media requests, claiming that this was a ‘spiritual matter’, Nolan sat with the NBC affiliate in an interview that aired this Thanksgiving. “It might look like it is discriminatory or particular or specific or targeted, but I disagree,” Nolan said. “Bishop (David Walkowiak)…has been and is supportive of me.”

Watch local news interviews with both Judge Smolenski and Nolan, respectively, below.

Hungary pulls out of Eurovision, allegedly due to homosexuality and LGBTQ representation

In dangerous defense of Trump, the religious right has begun fighting a holy war