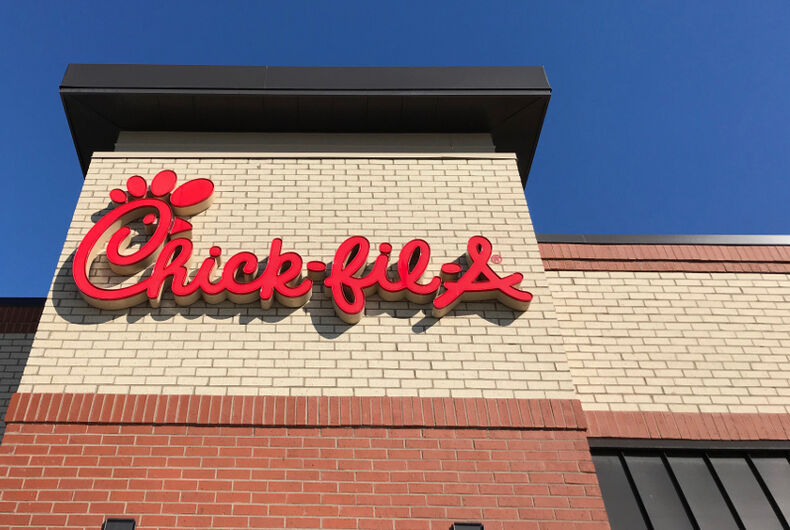 One of America’s most anti-LGBTQ pastors is promising his flock that Chick-fil-A has not caved in to the LGBTQ movement. He knows because the CEO told him so.

Earlier this week, Chick-fil-A issued a press release that said that they would change how they donate money, focusing on major donations to several large organizations that it can review yearly, instead of making multi-year commitments to many organizations.

Their press release mentioned Junior Achievement USA and Covenant House International as the major recipients of money under their new system. The Salvation Army and the Fellowship of Christian Athletes were nowhere to be found.

Franklin Graham – the son of Billy Graham and the CEO of the Billy Graham Evangelistic Association – said that he was curious about what changed, so he called up billionaire Dan Cathy, the CEO of Chick-fil-A. Cathy is the same person who said in 2012 that the company is “guilty as charged” when it comes to giving money to oppose marriage equality and support conversion therapy.

“Dan was very clear that they have not bowed down to anyone’s demands, including the LGBTQ community,” Graham assured his followers, in case they were worried that their favorite chicken sandwich was taking into consideration what the queers want.

“They will continue to support whoever they want to support. They haven’t changed who they are or what they believe. Chick-fil-A remains committed to Christian values.”

Graham then went on to argue that LGBTQ people will never be satisfied,

“In my opinion, the gay movement wouldn’t ever be happy with Chick-fil-A unless they were open on Sunday, gave all of their charitable donations to LGBTQ organizations, and flew the rainbow flag over their stores!” he wrote, not citing any proof. “Their hatred for Chick-fil-A is rooted in founder Truett Cathy’s strong stand for biblical ‘traditional’ values and his desire to honor God.”

Graham – unlike Tony Perkins of the hate group Family Research Council who implied that he never really liked Chick-fil-A’s food and he was just eating it because of the anti-LGBTQ donations – said that he still thinks Chick-fil-A’s food tastes good.

“No fast food chain does a better job. I went through the drive-thru at Chick-fil-A yesterday morning, and I thought I might get dinner there — but a whole lot of other people had the same idea! A Chick-fil-A sandwich with waffle fries sounds really good right now!” he concluded.

Has Chick-fil-A caved? Some are saying they’ve rolled over, that they’ve conceded to the LGBTQ protests because they…

Netflix is giving Kevin Hart a show. It’ll be about his problems with LGBTQ people.