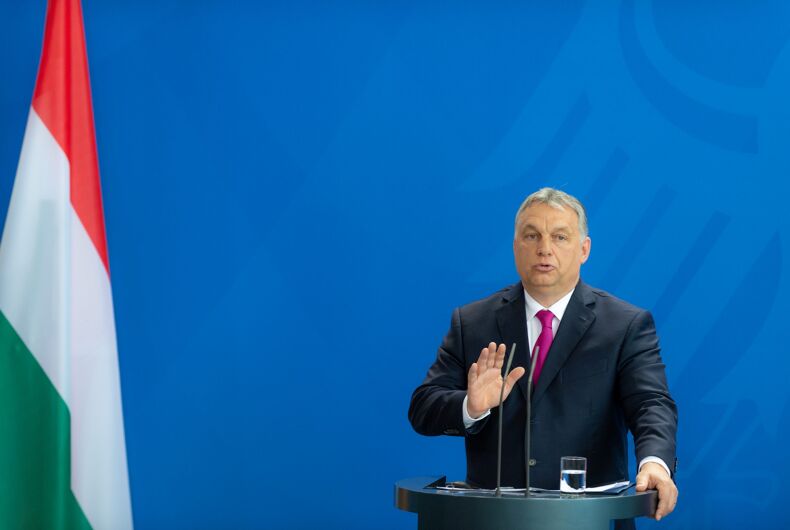 Viktor Orbán, the Prime Minister of Hungary, answers questions at the press conference at the federal chancellery in Berlin, 05 July 2018Photo: photocosmos1 / Shutterstock.com

In efforts to reportedly avoid aligning with the pro-LGBTQ presentation of Eurovision, Hungary will not participate in the annual continent-wide music contest for 2020.

According to The Telegraph, “sources within Hungary’s public broadcaster reportedly believe [the decision] is due to a rise in homophobic rhetoric within the country around the contest, with one pro-government commentator calling Eurovision a ‘homosexual flotilla’ (fleet of boats).”

The contest is a product of the European Broadcasting Union (EBU), which includes over 50 countries on the European continent and Australia as well. It has been on air since 1956, and propels unknown talents into superstardom such as ABBA, Celine Dion, and Johnny Logan. This spring, Eurovision is being hosted in Rotterdam, Netherlands and starts on May 16.

Hungary’s state-operated MTVA will continue on with its nationwide annual song contest, but they announced they will not send the winner to Eurovision, as had become the tradition. Likewise, Eurovision’s list of participating nations does not include Hungary. In 17 appearances, Hungarian has never placed higher than 4th place at the annual event.

Similar reports from both The Guardian and Hungary’s Index.hu stipulate that the country’s right wing administration doesn’t want to support Eurovision’s pro-LGBTQ promotion or its LGBTQ contestants. The current leaders of Hungary, which includes Prime Minister Viktor Orbán, seek to “promote traditional family values and aim to boost birth rates.” Index describes some in the administration as “fed up” with coverage of LGBTQ people.

A source reports that the decision on the media’s end is unsurprising, claiming that the homophobia “comes from the organisational culture of MTVA.” The source also reportedly claims that outside of annual coverage of Budapest Pride, the organization actively avoids covering LGBTQ+ people.

“Public media in Hungary is closely linked to the government and has been instrumental in spreading its messages around [anti-]migration and other issues,” The Guardian reports.

Earlier this year, Speaker to the Parliament László Kövér compared same-sex marriage and queer adoption to pedophilia, praised gay people that knew their ‘lower level’ status, and claimed transgender children are a “liberal” symptom. Weeks before, Donald Trump openly welcomed Orbán to the White House as a “pro-family hero”. As we reported, marriage equality is outlawed under a 2012 constitution amendment and same-sex couples cannot adopt in Hungary.

As Hungary has reportedly slid down the scale from a “free democracy” to “authoritarian” state under Orbán (in office since 2010 – his second stint in this position), so have the respect and rights afforded for LGBTQ people. In 2015, the Prime Minister reportedly said in an interview that LGBTQ people could face further repercussions and oppression if they become “more provocative” like the communities in other European countries.

Likewise, cultural commissioner Imre Kerényi said in 2014 that theater and film are “in the hands of the a lobby of f**gots.” In 2018, stage productions of Billy Elliott were cancelled by the state out of fear that they would “turn” kids gay. Earlier this year, European Coca-Cola ads featuring photographs of gay people caused Hungarian politicians to call for a ban of the company.

Orbán’s spokesman, Zoltán Kovács, tweeted that the accusations are “fake news” but no further explanation has been provided.