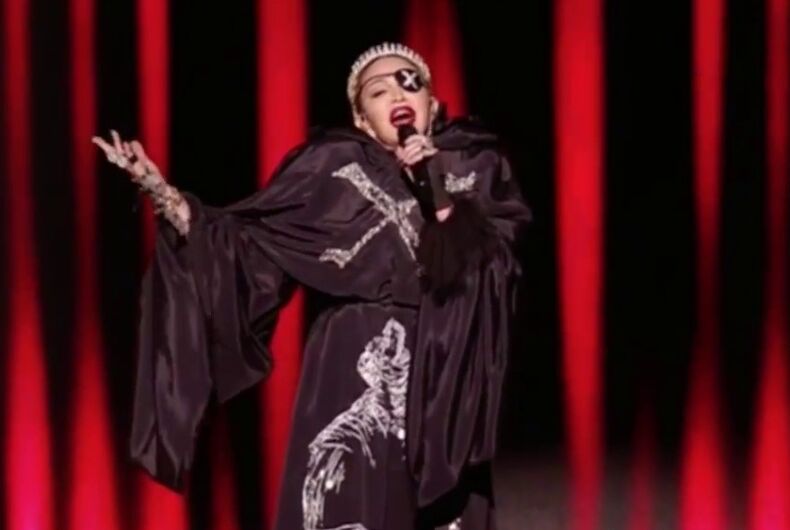 At yesterday’s Eurovision Song Contest Grand final in Tel Aviv, Israel, Madonna surprised viewers with a brief call for unity between Isreal and Palestine during the climax of her new song, “Future” — a call for unity which caught contest organizers and broadcasters by surprise.

The Guardian says that as she and her guest star Quavo sang, “Not everyone is coming to the future / Not everyone is learning from the past,” two of her dancers – one wearing a costume with a Palestinian flag on its back and the other wearing a costume with an Israeli flag on its back – embraced before climbing a set of stairs.

In the live broadcast of the Eurovision Song Contest Grand Final, two of Madonna’s dancers briefly displayed the Israeli and Palestinian flags on the back of their outfits. This element of the performance was not parr of the rehearsals which had been cleared with the EBU and the Host Broadcaster, KAN. The Eurovision Song Contest is a non-political event and Madonna had been made aware of this.

Here’s a brief video of Madonna’s political display during Eurovision.

It’s not at all accurate to call Eurovision “non political,” especially since it was actually set up in 1956 to bring together war-torn Europe after World War II. Each year the event (which has been called “the global music world’s ‘gay Olympics'”) brings some political intrigue.

“Turkey, for example, has boycotted the contest since 2018 over its inclusion of LGBTQ performers,” points out MSNBC. And this year, some fans told Madonna to boycott in protest of Israel’s expansion into Palestinian territory.

Organizers probably should’ve expected Madonna to do something political though, especially considering her statement earlier this week:

I’ll never stop playing music to suit someone’s political agenda, nor will I stop speaking out against violations of human rights wherever in the world they may be. My heart breaks every time I hear about the innocent lives that are lost in this region and the violence that is so often perpetuated to suit the political goals of people who benefit from this ancient conflict. I hope and pray that we will soon break free from this terrible cycle of destruction and create a new path towards peace.

"Let's never underestimate the power of music to bring people together" – @Madonna, at the Grand Final of the Eurovision Song Contest 2019.#DareToDream #Eurovision pic.twitter.com/18RF5r0Kq3

During the competition, Madonna said, “Let’s never underestimate the power of music to bring people together.”