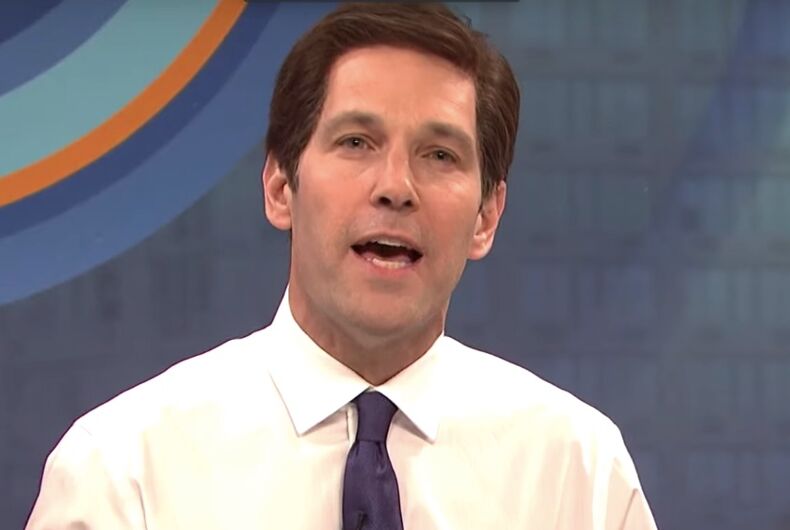 During yesterday’s season finale of Saturday Night Live, actor Paul Rudd played Pete Buttigieg in a parody of the women’s daytime talk show The View. The sketch was more silly than outright funny, but they did manage to hit on some Buttigieg trademarks that may gain wider lampooning should he continue his rise into the political spotlight.

In the sketch, Rudd comes out with his sleeves rolled up, a style commonly worn by Butigieg, and says, “I’m ready to work! See my exposed forearms?”

He self-effacingly comments, “I may only be 37, but I do feel like I represent everyday Americans. I’m just a Harvard-educated, multi-lingual war veteran Rhodes scholar. I’m just like you.”

Later on, he says, “I do wanna say that I wouldn’t be running for president if I didn’t believe America was ready to accept not only a gay man, but a boring gay man in the public eye.”

While the sketch eventually had an actor playing Buttigieg’s husband, Chasten, come onstage, it turns out the ladies of The View actually have their hearts set on a different political candidate altogether.

Here’s the Saturday Night Live sketch of Pete Buttigieg on The View:

The real Pete Buttigieg had a comedic moment on the Tonight Show with Jimmy Fallon this week when the two men teamed up to “slow jam the news.”

Last week, Trump tested his own humorously insulting nickname for Buttigieg calling him “Alfred E. Neuman,” after the big-eared cover boy of the humor magazine MAD. However, the insult backfired as Buttigieg said he had to Google the name to figure out who he was.

Buttigieg added,  “I guess it’s just a generational thing. I didn’t get the reference. It’s kind of funny, I guess. But he’s also the president of the United States and I’m surprised he’s not spending more time trying to salvage this China deal.”

Madonna surprised “non-political” Eurovision with a message for Isreal & Palestine