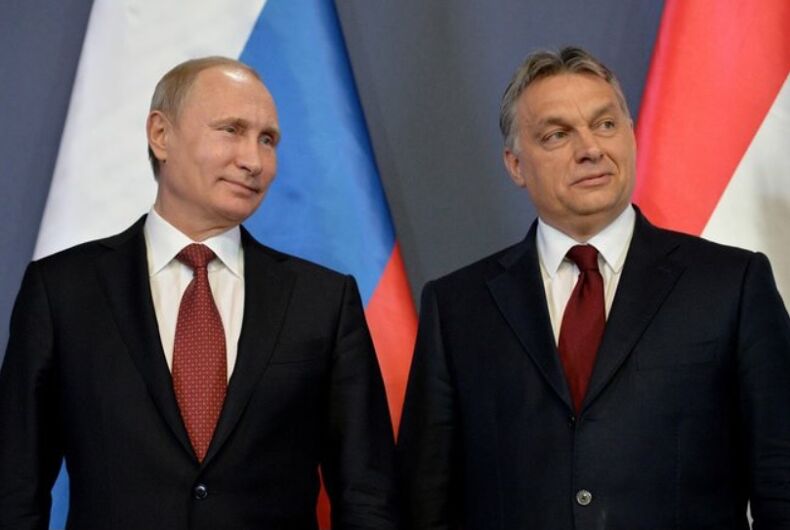 Several weeks ago, Politico reported that the Prime Minister Viktor Orban had been invited to the White House to discuss energy, regional security, and military cooperation. Orban and Trump are reportedly on friendly terms.

Orban has been the prime minister of Hungary since 2010, and he is best known for his legalistic approach to curtailing democracy.

But he’s also well-loved in Christian conservative circles for his opposition to LGBTQ rights. The group behind the World Congress of Families, a yearly anti-LGBTQ conference, praised Orban as a “pro-family” “hero.”

Conservatives also like Orban for famously saying, “Every country has the right to defend the traditional family model and is entitled to assert that every child has the right to a mother and a father.”

While homosexuality is legal in Hungary, same-sex marriage and adoption by same-sex couples are not. Marriage equality was banned by constitutional amendment in 2012.

The Orban government, which has no LGBTQ members, has made numerous anti-LGBTQ statements. Orban’s cultural commissioner, Imre Kerényi, said in 2014 that theater and film are “in the hands of the a lobby of faggots.”

Last year, the State Opera cancelled 15 performances of Billy Elliot after an op-ed in a government newspaper said that the play would turn kids gay.

“The propagation of homosexuality cannot be a national goal when the population is getting older and smaller and our country is threatened by invasion,” the article said.

The director of the State Opera, Szilveszter Ókovács, defended the production by saying that the only gay character wasn’t included in the Budapest production of the play, but cancelled the performances, citing low ticket sales that followed the controversy.

Orban himself described the state of LGBTQ rights in a 2015 interview by saying that he is grateful that “the Hungarian homosexual community” hasn’t shown “the provocative behavior against which numerous European nations are struggling.”

Hungary’s foreign minister told Politico that the Hungarian government has a better relationship with Donald Trump than with Barack Obama, saying that the two countries are now “friends.”

Trump might be looking to get advice from Okbar, who has made criticism of the government and elections that could actually remove his party from power more difficult. Freedom House this year downgraded Hungary from “free” to “partly free” in its annual report on democracy.