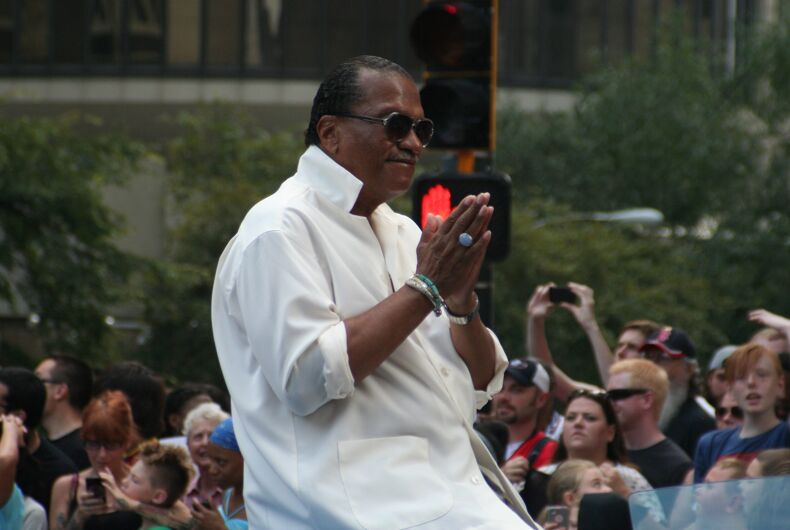 Update: Williams has clarified his comments, saying that he does not identify as gender fluid. He says he was actually talking about Jungian psychology.

At 82 years old, actor Billy Dee Williams is still finding new ways to make himself the epitome of cool.

In a feature profile for Esquire, the man known for playing Lando Calrissian in the Star Wars franchise – a role he’s reprising this winter for Star Wars: The Rise of Skywalker – talks about how he freely identifies with both he/him/himself and she/her/herself pronouns. It’s not immediately clear if Williams has a clear preference for one set of pronouns or not.

“I never tried to be anything except myself,” Williams said. “I think of myself as a relatively colorful character who doesn’t take himself or herself too seriously.”

In the article, most of the topics being discussed focus on Williams’ career, which started on Broadway at age 8. He also explores finding success as a painter, and how Carrie Fisher’s and Harrison Ford’s much-gossiped romance on the set of Star Wars films didn’t bother him the slightest.

Yet, the most surprising detail to arise from the article was Williams’ definition of his gender expression.

“And you see I say ‘himself’ and ‘herself,’ because I also see myself as feminine as well as masculine,” Williams tells Esquire Culture Editor Matt Miller. “I’m a very soft person. I’m not afraid to show that side of myself.”

Miller then tells Williams that Donald Glover, who has also played the now-pansexual character of Lando of late, also discussed embracing fluid gender identity and sexuality in the run up to his appearance in the Star Wars franchise. Williams ‘lights up’ and refers to Glover as “brilliant.”

Williams also discusses one of his other signature roles – as famed NFL running back Gale Sayers in the 1971 movie Brian’s Song, which inspired people like The Rock and Jamie Foxx to get into entertainment. The film was based on the real life kinship between Sayers (Williams) and Brian Piccolo (played by James Caan), and “a non-sexual love story” according to Fabulize, told through the eyes of Sayers after Piccolo comes down with terminal cancer.

“It was a love story, really. Between two guys. Without sex,” Williams said to Esquire. “…What I presented on that screen people didn’t expect to see. And I deliberately presented something that nobody had experienced before: a romantic brown-skinned boy.”

Solo: A Star Wars Story co-screenwriter Jonathan Kasdan (son of Lawrence Kasdan, screenwriter of several Star Wars films) confirmed in early 2018 that “There’s a fluidity to Donald and Billy Dee’s sexuality” in their portrayals of Lando. “…I would have loved to have gotten a more explicitly LGBT character into this movie. I think it’s time, certainly, for that, and I love the fluidity,” Kasdan told The Huffington Post.

After it became known that Glover’s version of Lando in Solo would identify as pansexual, Glover says that Williams simply told him, “be charming.”

In concluding the Esquire interview, Williams would only say about his role in the upcoming Star Wars installment that his Lando has a “conclusion”, but admits “one thing about show business, you can resurrect anything.”

Williams then signed a page of Miller’s notebook, saying simply “Nothing but the truth.” Congratulations on living your truth, Mr. Williams.

Good to be back in the Galaxy! #theriseofskywalker

Are you really boycotting Chick-fil-A? We conducted a survey to find out.

Hungary pulls out of Eurovision, allegedly due to homosexuality and LGBTQ representation