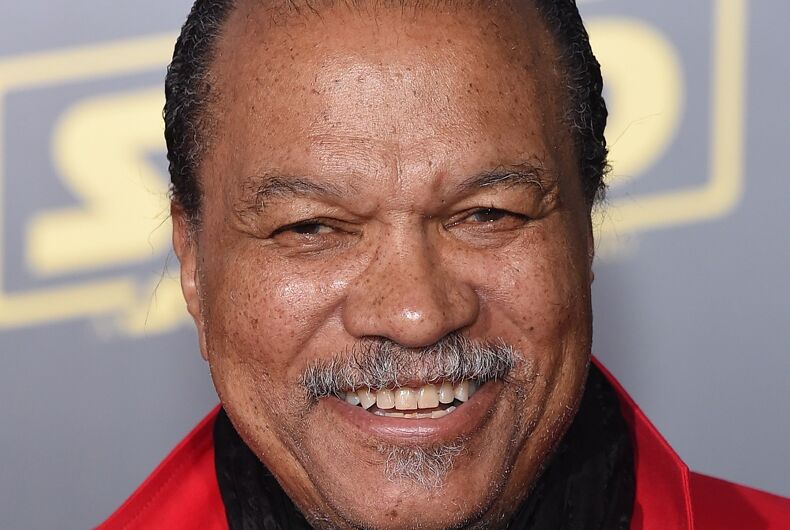 Last week, Star Wars actor Billy Dee Williams made some comments in an interview with Esquire that many people interpreted as coming out as gender fluid.

Now he’s saying that he was misinterpreted – he doesn’t even know what “gender fluid” means.

Related: The right can’t decide if Star Wars is pro-lesbian or pro-white propaganda

Williams – who is perhaps best known for playing Lando Calrissian in The Empire Strikes Back and who has appeared in a number of major Hollywood productions in the last five decades – said that he uses multiple sets of pronouns to refer to himself.

“And you see I say ‘himself’ and ‘herself,’ because I also see myself as feminine as well as masculine,” he said in the Esquire interview. “I’m a very soft person. I’m not afraid to show that side of myself.”

A lot of media outlets – including LGBTQ Nation – interpreted his comments as a statement about his gender identity, not his gender expression, because he was talking about pronouns and how he sees himself.

Well, it turns out his comments were less influenced by a desire to live as his authentic self as they were by analytic psychologist Carl Jung.

“Well, first of all, I asked last night. I said, ‘What the hell is gender fluid?’ That’s a whole new term,” Williams told the culture website The Undefeated.

And then the 82-year-old started talking about Jung.

“But what I was talking about was about men getting in touch with their softer side of themselves,” Williams said. “There’s a phrase that was coined by Carl G. Jung, who was a psychiatrist, who was a contemporary of Sigmund Freud, and they had a splitting of the ways because they had different ideas about the- what do you call it? Consciousness. Unconscious. It’s collective unconsciousness. But he coined a phrase that’s, ‘Anima animus.’ And anima means that is the female counterpart of the male self, and the animus is the male counterpart of the female.”

He proceeded to mix up gender identity and sexual orientation, emphasizing that he was not talking about LGBTQ identity.

He stressed that he identifies as “a very cute man,” adding that “people should read” Jung.

So it’s clear that Williams identifies as a straight, cisgender man, no matter what pronouns he uses to refer to himself.

“Bicentennial Man” was the best trans movie of 20 years ago

You’ll be able to get PrEP for free soon