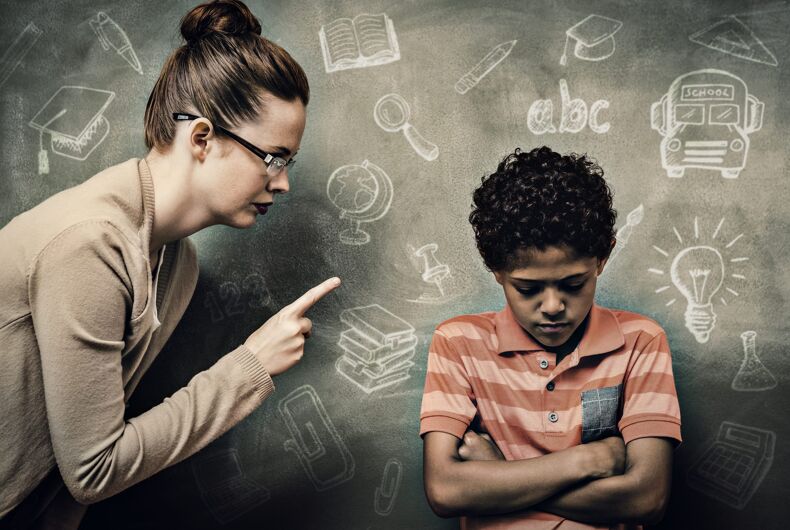 Education doodles against teacher shouting at boy in classroom (Stock)Photo: via Shutterstock.com

When a substitute teacher in a Utah County school asked a class of 5th graders what they were thankful for this Thanksgiving, one child couldn’t wait to answer. He told the class how happy he was to have finally be adopted, and live in a loving home with two caring fathers.

Unfortunately, the child’s excitement caused the substitute to subject him and his entire class to a undeserved, raging spew of homophobia, to the point that students had to leave the class against the substitute’s orders and beg the principal to remove her.

Related: The Trevor Project is getting $6 million in a historic grant to help LGBTQ youth

The incident took place at Deerfield Elementary in Cedar Hills, Utah – whose school theme this month, ironically, emphasizes the need for communication and respect for diversity. Josh and Louis van Amstel – the parents of the child, and the latter of whom is known for being a professional dancer on Dancing with the Stars –  took to social media. The child remains unnamed, due to fears that his adoption could be revoked.

| PLEASE READ THIS |When our son Daniel answered the substitute teachers question ‘What are you thankful for’ with: ‘I’m thankful for finally being adopted by my two dads’. The teacher went onto sharing her own views on Homosexuality and that it’s wrong. Three girls asked her multiple times to stop. When she didn’t they went to the principles office to complain.I’m proud of those three girls and Daniel’s school for standing up for our family against this bully. I’m truly disgusted that the bully in this situation is a teacher in a public school.#equalrights #allfamilies #allfamiliesmatter

As reported by The Salt Lake Tribune, the van Amstel’s child was subjected to directed bullying from the substitute after he revealed to her that he was part of a same-sex family. The 30 kid-classroom was subjected to 10 minutes of “her own views, [saying] how ‘homosexuality is wrong’ and ‘two men living together is a sin.'” She reportedly said directly to the student that being adopted by a stable, providing gay couple is “nothing to be thankful for.”

Deerfield is mere minutes from the state’s capital and largest city, Salt Lake City. The school is part of a district that outsources the hiring needs for its substitute teachers, so despite reports that her removal led to her firing, the substitute’s ultimate fate is unclear.Alpine School District spokesman David Stephenson can’t say if she will be outright fired, or if she’ll end up another classroom where she can subject students to ignorance.

When our son Daniel answered the substitute teachers question ‘What are you thankful for’ with: ‘I’m thankful for finally being adopted by my two dads’.

The teacher went onto sharing her own views on Homosexuality and that it’s wrong. 3 girls asked her multiple times to stop.

When she didn’t they went to the principles office to complain.

I’m proud of those three girls and Daniel’s school for standing up for our family against this bully.

From The Tribune report:

Three girls asked her to stop multiple times. But she continued, so they walked out of the room to get the principal.

As the substitute was escorted out of the building, she was still arguing, trying to make her point, the boy’s fathers say they were told by school officials.

“She also tried to blame our son,” said one of the boy’s dads, Louis van Amstel, “and told him that it was his fault that she went off.”

The child was reportedly so shocked and traumatized by the event, he refused to talk about it until his parents persuaded him otherwise. Most of the report that the school gave the parents was compiled directly from other students. The child also admitted that “he didn’t speak up…because he’s had two failed adoptions before and didn’t want his dads to rethink their decision, with his final court hearing coming up.”

The outsourced substitute teacher company, Kelly Staffing Services, said in a statement that they are investigating the incident and do not condone the “reports of inappropriate behavior” from their staff at all.

“It’s absolutely ridiculous and horrible what she did,” van Amstel told the Salt Lake newspaper. “We were livid. It’s 2019 and this is a public school.”

Like most school districts, the regulations on substitute teachers and school staff are described as ‘lax’ in Utah, with the state only requiring that all candidates pass a background check. Alpine School District, however, believes they put substitutes through “extensive training” and that they are “committed to having the best employees who care about all children in our schools, whether it be the teacher, the custodian, the secretary or a substitute teacher.”

Kelly Services already made millions this year from the Alpine District, the largest in Utah – the state in which it serves the entirety of.

The van Amstels, school and district all express their gratitude to the students who followed their conscience and worked to end the substitute’s tirade.

In dangerous defense of Trump, the religious right has begun fighting a holy war