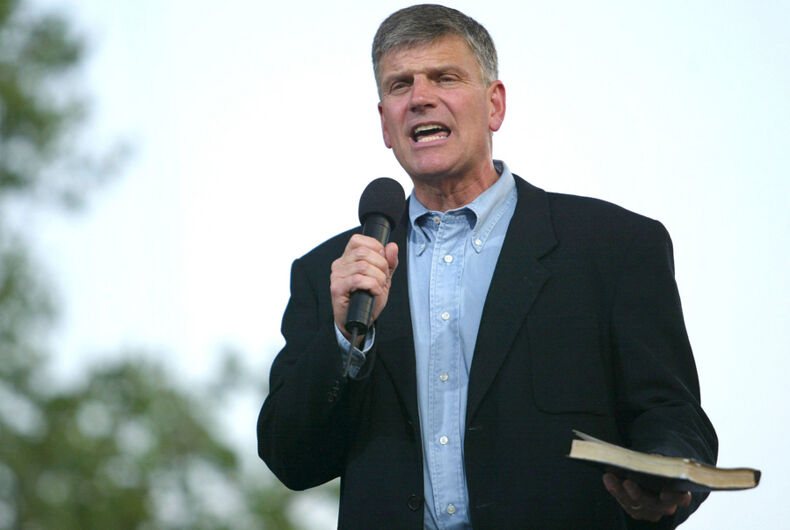 One of America’s most prominent evangelicals blamed STIs on not following “God’s guidelines,” which include heterosexuality.

Pastor Franklin Graham, CEO of the Billy Graham Evangelistic Association and son of Billy Graham, linked a CNN article about how three particular STIs – gonorrhea, chlamydia, and syphilis – are at all-time highs in the U.S. in 2018, according to numbers from the Centers for Disease Control (CDC).

Related: Franklin Graham tells parents to pull kids out of school because the lessons are ‘an affront to God’

Graham started a Facebook post by saying that the topic “won’t be mentioned in the upcoming Democratic debate,” a bizarre statement since three red states – Alaska, Mississippi, and Nevada – are mentioned in the article for having the highest rates of cases of the three STIs.

“The statistics in the CNN article verify that there’s a price to pay [for having sex], and it is a very heavy price,” Graham wrote.

He stressed that gender roles, heterosexuality, and monogamy are the keys to preventing STIs: “God made us male and female and gave sex for us to enjoy inside a marriage relationship between a man and a woman — not two men, not two women.”

“The Bible says that anyone who sins sexually, sins against their own body. How true. What’s the protection the world is looking for? It’s simple — follow God’s guidelines. Have only a monogamous relationship with your husband or wife.”

Graham then tells people who “are one of these statistics” to pray. He promises his followers that God will “cleanse your heart” and “it will be as though you’ve never sinned.”

While that is not exactly a promise that prayer will cure a disease, he doesn’t explain in his Facebook post that his followers should seek real medical attention if they have an STI.

And when it comes to his reasoning – that STIs are increasing because people aren’t following “God’s guidelines” – the CDC disagree. In the article Graham linked, senior deputy director of the HIV/AIDS, Hepatitis, STD and TB Administration at the DC Department of Health Michael Kharfen said that increased testing is the biggest reason for the increase in STI rates.

“We have been very aggressive in making STD screening available in lots of different both clinical and community settings, particularly among young people, who have a disproportionate number,” he said.

The report also cites a decline in condom use as the other reason that the STI rates have increased.

CDC epidemiologist Elizabeth Torrone stresses the importance of health care in the CNN article. She says that there were 94 known infant deaths from congenital syphilis last year, which “could have been prevented if pregnant women had been treated appropriately and in a timely way prior to delivery.”

“We really need to make sure that all pregnant women are screened at their first prenatal care visit, treated appropriately and that their partners are treated so that we prevent reinfection.”

If Graham is really concerned about people’s health, perhaps he could use his clout to get Republicans to seriously advocate universal health care.

Here’s a topic that probably won’t be mentioned in the upcoming Democratic debate. An incredible 2.4 million cases of…

A picture of 2 black men kissing went viral. Here’s why people love it.