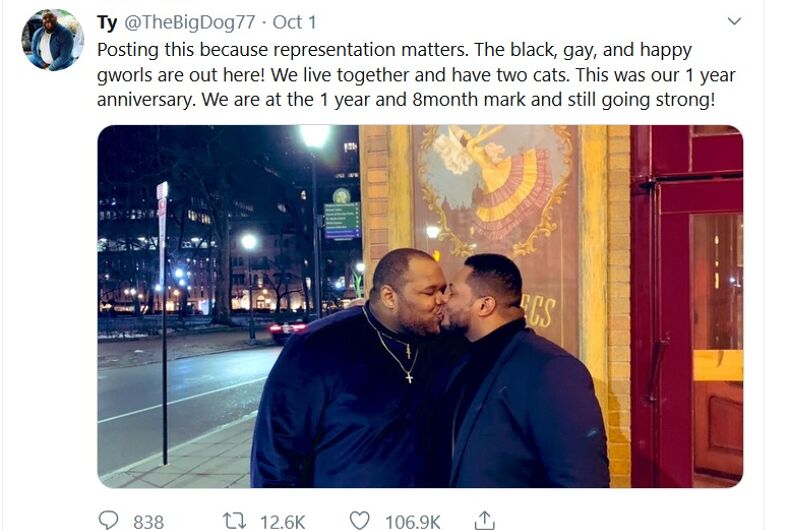 When 26-year-old cancer researcher Tyler Hightower posted a photo of himself kissing his boyfriend, a construction manager named Ahdeem Tinsley on Twitter, Hightower only had 44 followers.

He didn’t expect the image to cause much of a stir. Now, a week later, the image has been shared over 12,000 times and liked over 100,000 times, with numerous people celebrating the image of love between two black, big-bodied men.

In the initial tweet, he wrote, “Posting this because representation matters. The black, gay, and happy gworls are out here! We live together and have two cats (Buddy and Gigi). This was our 1 year anniversary. We are at the 1 year and 8 month mark and still going strong!”

Hightower told NBC that on the night they took the photograph, they each got matching tattoos of each others’ initials and the date.

Here is the full picture:

Posting this because representation matters. The black, gay, and happy gworls are out here! We live together and have two cats. This was our 1 year anniversary. We are at the 1 year and 8month mark and still going strong! pic.twitter.com/MZiIfzl5e1

The picture is all the more striking when you consider that most media has never depicted two large-bodied men of color being affectionate with one another. The latest GLAAD report on TV diversity showed that only 14 to 25 percent of queer characters on TV are black, and most are thin.

For many viewers, the 2016 movie Moonlight and short-lived 2005 TV series Noah’s Arc offered the only depictions of black same-sex male relationships that people have ever seen onscreen.

The responses have been awe-inspiring. People are replying saying that the picture made their day and that they didn’t know there was love for people like them.

Part of our identity is being fat, heavy, thick, black and gay men, and we want all people to know that no matter your size, color or religion, be yourself and live authentically, and you will find love.

The couple have also since made a YouTube video in which they share more about themselves and how they met: