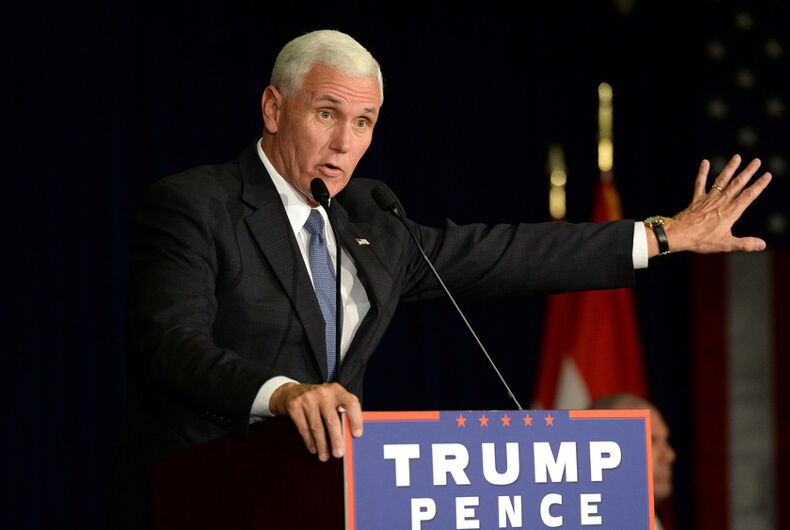 The government watchdog Pro Publica has revealed that Vice President Mike Pence is re-routing funds from the U.S. Agency for International Development (USAID) to Christian groups in the Middle East, potentially igniting religious tensions in the region and violating Constitutional guarantee of the U.S. government not favoring one religion over another. He also installed political appointees within USAID who know nothing about grant-making or foreign policy and arranged for the firing of a USAID employee who allegedly opposed his agenda.

Usually, foreign applications for U.S. financial aid get overseen by “career professionals [who apply] a rigorous review of applicants and their capabilities,” writes Pro Publica. But after interviewing 40 current and former U.S. officials and aid professionals, the publication found that Trump appointees had balked against internal rules forbidding funding for any groups who sought funds to spread their religion. Pence’s appointees helped approved nearly $373 million in funding to Iraqi Christian groups which had USAID previously rejected as lacking merit.

One of these groups had “no full-time paid staff, no experience with government grants and a financial tie that would typically raise questions in an intense competition for limited funds,” the publication writes. The second group was only awarded funds after its leader and allies complained about being rejected in the past.

USAID spokeswoman, Pooja Jhunjhunwala, said that the funding of these groups sought to prevent ISIS genocide against religious minorities, as Christians make up barely 2% of Iraq’s predominantly Muslim population. But Muslims are largely victimized by ISIS as well, making it questionable whether Christians are more deserving of USAID’s funding.

One unnamed former U.S. foreign service officer said that the funds were being directed towards a small Christian population in the largely uninhabited and rural Nineveh Province rather than creating stability in more densely populated cities like Mosul. Stability in urban centers prevents dissatisfied young men from trying to improve their living situations by joining ISIS’s ranks, the officer said.

A current official said that Trump’s appointees had a “very ideological focus on Christians despite] others in the minority communities that might need assistance.” In October 2017, Pence pledged to an influential Christian group in Washington that USAID would help persecuted Christians, despite the fact that USAID itself hadn’t yet approved any such funding.

Then in December 2017, Pence met with Bashar Warda — a Christian archbishop based in Erbil, Iraq — who influenced Trump and the then-Republican-led Congress to pass a bill “authorizing the State Department and USAID to provide relief to victims of Islamic State, particularly religious minorities.”

Important dialogue with Bashar Warda, the Archbishop of Erbil, about @POTUS' commitment to directly assist persecuted Christians & religious minorities in Iraq. I’m heading to the Middle East this month to discuss U.S. plans to accelerate funding those impacted in the region. pic.twitter.com/eQIdNytPlZ

Pence also sent appointees to a March 2018 USAID meetings in Baghdad to influence the group’s financial giving. On June 8, 2018, Pence’s spokeswoman said he “will not tolerate bureaucratic delays in implementing the Administration’s vision.”

“That same day, Pence’s then-chief of staff, Nick Ayers, called [Middle East bureau official Bill] Steiger to demand somebody at the agency be punished for the failure to provide aid to Christian groups quickly enough.”

Shortly thereafter, Mark Green, the head of USAID, fired Maria Longi, a top official in USAID’s Middle East bureau. Speaking of her firing, her co-workers said he had been “Penced.”

This news isn’t so surprising considering that Trump’s Department of Education threatened to pull hundreds of thousands in federal funds from the Duke-University of North Carolina Consortium for Middle East Studies because the consortium doesn’t emphasize “positive aspects” of Judaism and Christianity in the region enough for Trump’s liking.