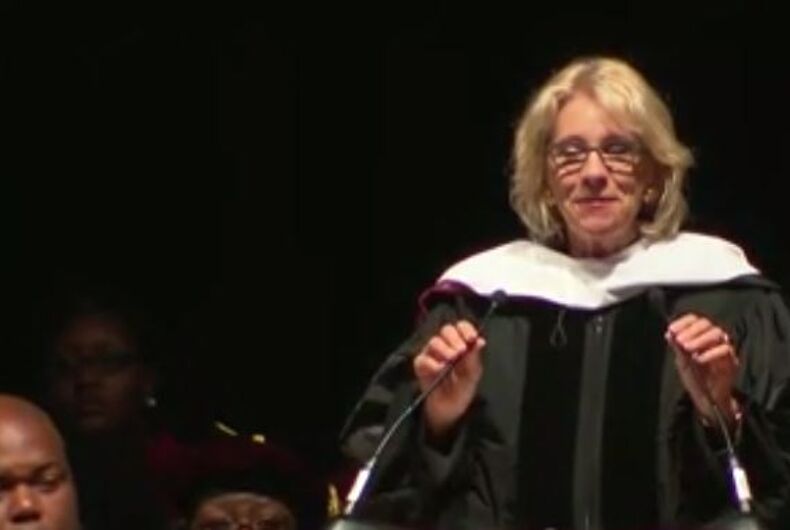 A loud contingent of students at Bethune-Cookman University expressed their anger that Secretary of Education Betsy DeVos was awarded an honorary degree and asked to give the commencement speech on Wednesday, and they showed it with turned backs and boos.

While some in the audience cheered for DeVos, they were overpowered by those showing disdain that she was being so honored, even after making controversial comments seen to be downplaying the role that racism played in the need for the creation of historically black colleges and universities (HBCUs).

DeVos tried to compare HBCUs with the “school choice” policies she favors.

Bethune-Cookman President Edison Jackson tried to quiet the crowd by threatening that the students protesting would have their diplomas mailed to them, but that did nothing to stop the booing and jeering.

When Jackson acknowledged White House communications official Omarosa Manigault, who first rose to fame on TV’s The Apprentice, sitting in the audience, that too resulted in booing, the HuffPost reports.

“You don’t know her, and nor do you know her story,” Jackson said, further upsetting students.

DeVos said she was “honored to become a Wildcat” and called it a “real honor and a privilege.”

“I want to reaffirm this administration’s commitment to and support for HBCUs and the students they serve,” DeVos said. “Please know this: We support you and we will continue to support you.”

Time has published the full transcript of DeVos’ speech.

She was also booed during the presentation of her honorary degree, as it was suggested that she would “work with President Trump to advance equal opportunities for quality education for all students.”