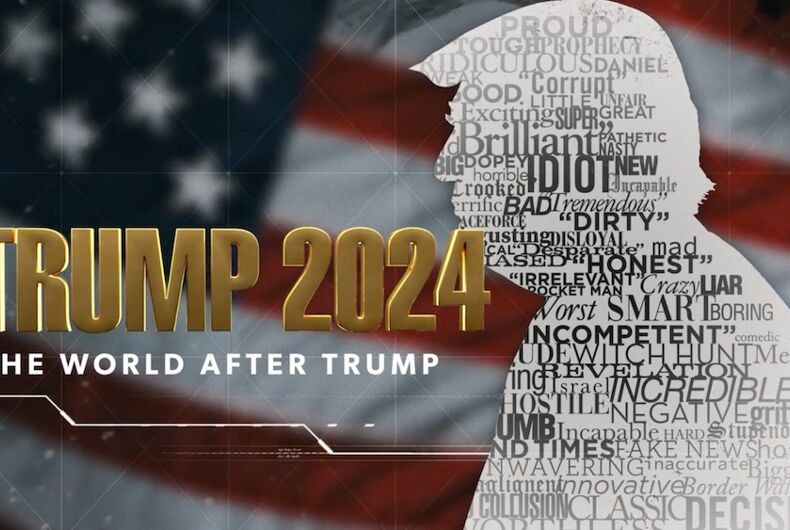 Far-right Christians and hate groups have made a movie to say the world will end if President Donald Trump isn’t reelected. It’s called Trump 2024: The World After Trump and it’s basically a long political ad to convince gullible religious voters to re-elect the most anti-LGBTQ president of all time.

The film is a veritable Who’s Who of anti-LGBTQ pastors, politicians, and pundits, each talking about why Trump is the only way to stop the New World Order, globalists and socialism, common dog whistles for immigration, Jews and taxes.

Related: Oppose LGBTQ rights? Trump campaign advisor says you should vote for him

The film’s trailer also shows an image of the White House when former President Barack Obama lit it up in rainbow colors for Pride month — it’s supposed to be horrifying… or something. Here’s a quick round-up of the hateful talking heads in the film’s trailer:

Jack Graham, a Senior Pastor of Texas’s Prestonwood Baptist Church who opposes “transgenderism” and thinks same-sex marriage is based on Satanic lies.

Star Parker, the Fox News pundit who sees no difference between the Confederate and rainbow flags and thinks the “B” in LGBTQ stands for “bestiality”

Mike Huckabee, the failed Republican presidential candidate who claims that LGBTQ rights are the “greatest threat” to America, that gay marriage is akin to alcohol and profanity and that the U.S. should ban same-sex marriage.

Brigette Gabriel, the Islamophobic founder and president of ACT! for America, who thinks U.S. schools are secretly training kids for “a stealth jihad against America.”

Stephen Strang, founder of the Christian magazine Charisma, who believes that LGBTQ anti-discrimination protections are merely a way to criminalize Christianity.

Paula White, a worker in Trump’s Office of Public Liaison, who believes God personally assigned her to be Trump’s spiritual advisor and has “warned of consequences from God for those who don’t stand with the president” stating that those who oppose him are “fighting the hand of God.”

Franklin Graham, an anti-LGBTQ evangelical leader who recently required COVID-19 medical volunteers to sign a statement agreeing that transgender people don’t exist, same-sex marriage is a sin, and gay people should be celibate or risk “damnation and eternal punishment.”

Eric Metaxes, a religious-right radio host who uses his program to provide a platform to at least one anti-LGBTQ extremist with ties to a Christian hate group that targets queer people.

Samuel Rodriguez, president of the National Hispanic Christian Leadership Conference, called the legalization of same-sex marriage “de facto and legal catalyst for the marginalization of Americans who embrace a biblical worldview.”

Bob McEwen, former Executive Director of the Council for National Policy (CNP), who did very little to address the alleged sexual assault of an 18-year-old boy by Ohio state representative Wesley Goodman during a CNP conference.

Mike Lindell, the My Pillow CEO who refused to pull ads from FOX News host and longtime homophobe Laura Ingraham.

William Boykin, a Religious Right speaker specializing in anti-Muslim rhetoric and anti-Obama conspiracy theories who was named executive vice president of the Family Research Council in 2012.

Bishop Harry Jackson, the virulently anti-LGBTQ pastor who said gay people want to “recruit your kids” and the movement for marriage equality proved that the U.S. was “just like during the times of Hitler.”

Why did white people only start to care about racism now? What gives?

What does July 4th mean to Black America this year?